My calico cat cannot wait to be served. She thrusts her head under the spoon. Today she got a strand of tuna on her head. Her ear twitched, but her mouth kept eating. Vanity and greed struggled in her. As they do in Donald Trump. But cuter in the cat.

--Cheryl L. Caesar
Posted by John Grochalski at 5:08 AM No comments:

The Mask Goes Over Your Nose 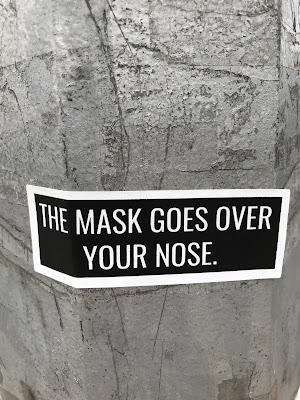 Posted by John Grochalski at 5:07 AM No comments:

To dust. The president does not use the term “stolen”
as a euphemism, where he was beaten by an upstart

Who captured the imagination of a people and surprised
the political world. No. This is a bully taking a bike or

Milk money during school hours and when caught he
demands the victims prove otherwise. Stolen, the way

Or guns - things people are too lazy to take inside. Stolen
by breaking an oath to uphold his sworn duty, a long-

Standing agreement between the government and its people.
The broken promises of this country are stitched into our DNA

And the spilled blood absorbed into the soil. Do not be fooled
what the president wants to take has been taken before. The ghosts

Of the betrayed rise from their graves. Our common shared
ancestor is an enemy that has eaten all the low-hanging fruit,

Yet still hungers for more. Agreements drawn and re-drawn
like gerrymandered districts cut and pasted to form a wall.

The voices of a choked history tried to warn us. Their warnings
echo through the South, the Black Hills and Wallowa Valley - a roll

Call of the displaced from sea to shining sea. They've told us: to thieves
honor is for the weak, blood inconsequential, and power is their gold.

--Tom Lagasse
Posted by John Grochalski at 5:07 AM No comments:

crossing yourself
twice as
you step
out into
open sky.

--Matt Borczon
Posted by John Grochalski at 5:06 AM No comments:


I know right where it is—in which room, on which bookcase
and on which shelf of that bookcase. And that isn’t always
how it goes. Sometimes I’ll scramble for hours in my place
looking for a book, a record, or some small scrap of paper.

It’s a first edition, ex-library, no dust jacket. And I believe
my mother got it for me at John King in Downtown Detroit.

The bookplate on the front pastedown indicates that it was
withdrawn from Marygrove College. The “Due Date” label
on to the rear flyleaf shows the last check out was in 1988.

I wonder now, in 2020, who decided to withdraw this book
from the library back in the late 80s or early 90s, decided it
to be a volume the library did not need on hand any longer.

Tucked in at “Lying in a Hammock…”—and of course at
that poem—is Naca’s short, handwritten note, scrawled in
her neat cursive on the back of a scrapped photocopy from
a book entitled Transcendental Wordplay. Her note reads:

The note now must be over 15 years old—closing in on 20.
It’s just a little thing. A scrap of paper. A bookmark now.

But I love how it can remind me of those days years ago.
The days and nights. Those memories. Of times far gone
and away. Not to say that they were the best times ever.
Just different. Just not now. Vivid images I can conjure—
riding on the back of Naca’s motorcycle on Fifth Avenue,
or at a small party in some apartment dancing with Emily.
Or maybe at Brandon’s place with Bruce Lee looking on
as Brandon did his impression of all four guys from U2.

Time, time. Always time. The world spins its ugly spins
until it finds something beautiful again. And it carries on.

It carries on.
--Scott Silsbe
Posted by John Grochalski at 5:06 AM No comments: 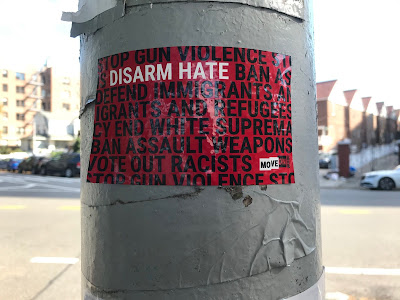 Posted by John Grochalski at 7:46 AM No comments:

I can hardly believe
that Trump has gone.
It seems too good to
be true, like I'll wake
up to find it was all
a dream.
I have no idea what
Biden will be like, but
even as a symbolic
gesture it feels good
to get D.T. out of the
White House.
I believe what Dylan
said " Don't follow leaders. "
But if that is the best
we could get to be
the leader of the most
powerful nation on
Earth, then we really
are looking sick.
We can't rejoice yet,
no one can even get
together for a party.
But it feels like a
line has been
crossed, I hope that
it has.
That we can think of
love, instead of hate.
Sharing rather than
shunning. Unity, not
disparity.
You may say I'm a
dreamer, but I'm not
the only one.

--Ian Copestick
Posted by John Grochalski at 7:46 AM No comments: