One can waste a lot of moments trying to be profound. I know that because what you’re reading right now is the end result of that very foolish endeavor. To be honest I’m not a very profound person. I’m gut and reactionary. What is to be said of today? I could use the words dignity and eloquence to describe the eight years of the Obama administration, but over the past few weeks the words have become overused despite how well they fit. I’ll say simply that I’m going to miss the man, his family, his administration, and the way that President Obama tried to steer this nation toward something resembling a collective empathy.

Simply said: the story of America is a story of immigrants. The incoming president and the collection of domestic terrorists otherwise known as the GOP may not recognize that, but it’s true. Be they the people who were enslaved and brought here against their will, brutalized, traumatized, terrorized and demoralized as they built this nation, or ones who came here of their own volition; America is the story of the “other.” It would do us all a good service to remember that over the coming four years.

That isn’t to suggest that we’ve blossomed into a full utopia. A simple look at police shootings of African Americans, particularly Black males, and a look a domestic violence and rape statistics against women, and assaults on immigrants show how very far we haven’t come.

This refashioned WineDrunk SideWalk blog is no longer a forum for my own writing, but is not being transformed into a forum for resistance through art. Resistance to Trump. Resistance to the incoming GOP apocalypse. Back in November, still reeling from the election (but not surprised at its outcome at all) I made a call to poets, writers, artists, etc. to come and join me on this blog. Many have and I thank them. Over the next 1460+ days you’ll be seeing my writing and the work of many others on here. I hope you enjoy. I hope it makes you think. I hope it helps keep that part of you that those motherfuckers in Washington D.C. are going to try and strip down and trample all over. I welcome others to join. Email me at Winedrunksidewalk@gmail.com with your poems, your rants, your painting, your drawings, your photos….hell gimme what you got! IN THE BODY OF AN EMAIL PLEASE.

We’ll come out of this alive….well….most of us will.

To close I’m going to give you the sweet and sour. The sweet is an email that my father-in-law sent to his daughters the day after or a few days after the election. Its very own dignity and eloquence made me want to use it to set the positive tone of this blog. Don’t worry they’ll be plenty of negative. But my father-in-law’s story is an immigrant story. His story is an American story.
So….ladies and gents and all others I give you Big Ron:

Though a few days have passed since the election and the anger had subsided somewhat, I still have this hole in my soul that will be there for at least four years.

I'd like to tell you something - I grew up in the 50s and 60s and l saw firsthand what America was then. I used to say when the next generation comes along things will get better.

And it did. We elected the first black president and i thought we were finally going in the right direction.

Here we had a chance to elect a woman for president and break that glass ceiling. That didn't happen.

I came to this great nation as an immigrant and I may not have accomplished personally everything I wanted but what I'm most proud of are the strong daughters that I have and that I know you'll fight to break that glass ceiling.

I may still see a Madam President.

I love you all more 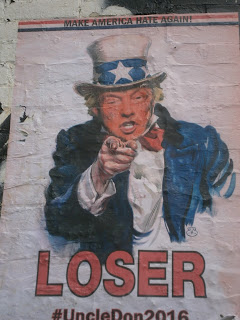 Posted by John Grochalski at 6:57 AM