I see deep blue curtains parting
against a midnight street desolate with
Edward Hopper window views
as the voice on the radio comes from
behind a podium somewhere
speaking of “first amendment responsibilities”
to say nice things about a man
who berates others with a viscous joy
his foot on their throats, chuckling,
and all along the empty streets in Greenpoint
the garbage waits for the morning pick-up
for someone to come and take it away
though some dented cans have a longer night
ahead of them than others

in the sunlight, crossing the Pulaski bridge
the rain begins, just a few drops here and there
it is holding something back, holding a rebirth
or a hell, watching the tide of the canal, waiting
for human omens before deciding
which it will be

along the bridge there is graffiti,
there are markers of who we are, what we know
stickers and posters and cautions
signs and warning
revelations
truth
a deep horn sounds and the bridge
begins to rise, just as the rain falls
: finally, a judgement
and I wait to see which it will be
the beginning or the end
wondering which we truly deserve 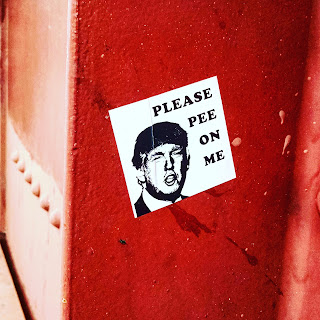