because Trump does so many deplorable (yeah, i'm using the word on purpose) things in the course of  a week, the continuing fear is that we all become numb to it and that behavior like this in the office of the President of the United States becomes normalized....don't let it. I've made the mistake myself of walking around saying to people that I'm not shocked or surprised at what the DOUCHE has been doing since he and his fascist ideas landed square on our collective faces on January 20th, 2017....and I'm not.  I've had a lifelong hated of Donald J. Trump that extends way before his run for the highest office of the land....and, yes, nothing that he does shocks or surprises me....but i personally need to get back to a place where i am SHOCKED and SURPRISED that this is coming from the Oval Office....and if you're out there like me....i want you to try and feel the same way.

WE WILL NOT NORMALIZE THIS PRICK.

So it seems that DOUCHE has become bored with the NFL or with trashing health care or taking away women's rights, and threatening the likes of Kim Jong-un and it seems like he needed a new enemy this week.....so why not take on his own fucking military.

That's right...first it was accusing Obama and past presidents not making calls to military families when their children have died in battle defending American in another one its bullshit wars...which was an honest to goodness insult of not only Obama but of every commander-in-chief that has served before our current shit-stain, but was an insult to military families that know this is simply not true....not to mention the fact that news came out that Trump told a military widow in one of his calls that he "knew what he was signing up for." Hmmmm

Of course this isn't the first time DOUCHE has done this...anyone remember the Khan family? Yes, the gold star Muslim family whose son died in battle defending the United States and its Constitution, two things Donny John couldn't give a fuck about. Remember when he spent the summer of 2016 dragging them into his sick mess.

WE WILL NOT NORMALIZE THIS PRICK.

or how about the funny ha ha we all learned about this week in regards to Mike Pence? According to DOUCHE he likes to make fun of Pence for those quirky little things he does like making people pray with him....or wanting see gay people hung.  As much as I hate Trump I'm honestly terrified by a Mike Pence presidency. Trump is a dangerous lunatic, but Mike Pence is a LGBTQIA hating closest case who's a right wing stalwart loved by his colleagues and  owned by the KOCH Brothers....these two honky assholes: 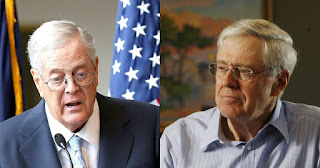 if ever I had to picture the white devil himself...and maybe his brother...it would be those two freedom hating fucks. A Pence presidency would essentially official make the highest office in the land owned by the Koch Brothers.  We've discussed it here before....Trump has to go....and he might....but we've got a long way to go to right this shit and steer it away from white American voters who sold this nation out.

You wanna see a bunch of Republican lawmakers walk around with hard-ons that aren't Viagra induced.....go to D.C. if Pence becomes president.

your choices for the next 3+ years (at least): Lunatic Fascism or Oligarchy.

Apparently our "president" believes that the health subsides for the ACA exist to bail-out insurance companies instead of helping sick people pay for their insurance thus proving once and for all that he's a fucking moron who doesn't know ANYTHING about the ACA.

WE WILL NOT NORMALIZE THIS PRICK

but....speaking of things that aren't normal.  It looks as though members of the GOP establishment are beginning to speak up and speak out against DOUCHE....without naming him, of course.

That's right, John McCain, war hero and all around honorable man, gave a speech this week in which he warned against the United States turning toward "half-baked, spurious nationalism" which is pretty much what Trump/Bannon and co. have been cooking up since the early 2010s.

and not to be outdone, the newly minted 2nd-worst president in U.S. history, George DUBYA Bush, came out this week and said a bunch of things like how our political system has become corrupted  by "conspiracy theories and outright fabrication," and how nationalism has become "distorted into nativism."  DUBYA also added in his speech that "bullying and prejudice in our public life sets a national tone and provides permission for cruelty and bigotry."

Even spineless toad Paul Ryan got into the ACT.

look....i didn't come into this diner this morning to shit in anyone's oatmeal but let's be completely honest as we congratulate these heroes of democracy for speaking out....but not mentioning Trump by name.

John McCain......while John McCain voted no and did not vote for 3 of DOUCHE's cabinet members he voted yes for all of the others including that racist Jeffy Sessions and that environmental destroying prick, Pruitt.

as for DUBYA.....need I say more than the 2003 invasion of Iraq.  Since 2003, over 500,000 iraqi citizens have been killed. To put that in perspective that's like wiping out Fresno or Sacramento, or like killing everyone and everything in Pittsburgh and then having to go somewhere else to kill 200,000 more people.

also----let's not forget that DUBYA's little invasion of Iraq gave birth to that wonderful little organization known as ISIS.

so to John McCain and DUBYA Bush i applaud you for speaking out....even though you didn't name Trump by name....but...in all due respect....FUCK YOU BOTH.

AND....to John Kelly who decided on Thursday to open his fat mouth and defend that Orange Narcissist....might I suggest once you finish your walk in Arlington Cemetery "among the finest men and women on Earth" that you take a stroll through one of D.C.'s many homeless shelters...or maybe to a Rape Crisis center to see the end result of what men like Donald J. Trump do when they grab 'em by the pussy and destroy lives...or how about a food pantry...a free health clinic....or how about you take a walk through the hundreds of neighborhoods destroyed by the spoils of the type of unbridled capitalism your derelict president and the nefarious swine in congress want to bring storming back. You want finest? You want courage? Go seek out people who struggle each and every single day just to get by in this flaming shitstorm called America.

look, John Kelly, i'm truly sorry your son died in this endless war, but save me the pious act if you're defending that gold-plated piece of trash called Trump...next time maybe say nothing, play with your toy soldiers and wait for your goddamned coup. Oh...and I hope on the way out of Arlington you stopped by Dr. King's grave and tried to explain to him how in 2017 we ended up with a racist motherfucker like Trump in the White House.

Last but not least I offer you all a widely viewed photo of the GOP after the Senate passed the initial phase of their fuck-you-poor-and-working-class-and-middle-class tax overhaul that, i think, when finished, pretty much turns the United States into a complete and total oligarchy run by corporations and mad white men...if it isn't already. 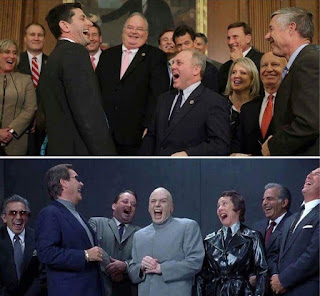 WE WILL NOT NORMALIZE THIS PRICK


anyway....stick around.  Today at 10:30 I'm taking a chance on the photography of some cranky old man named Grochalski....and on Sunday at 10:30 we have the poetry of Jennifer Lagier.

I NEED WRITING FROM YOU....yeah you....the ones reading this blog but not contributing shit....are you complacent? Are you totally FINE with the things I mentioned on this here wrap-up?
if not....write something....and send it to me.