I don't even know where to start this week....honestly I got back to editing the 3rd (and probably final) Rand Wyndham novel, tentatively titled The Poet, so I really hadn't been paying much attention to the news....and truth be told if you're not on top of DOUCHE and his cronies you can really miss a lot.

So where do we begin? With Bob Corker calling the DOUCHE White House a reality TV show? Something we all know...or how he fears that the "fucking moron" will stumble us into World War III...something we also all know. Or how about baby-dick "president" DOUCHE himself resorting to his good ol' tactics of giving Corker a nickname like Liddle....which in DOUCHE speak means little....see, Bob Corker is 5 foot 7 and in TrumpLand being short, being handicapped, being a minority, being a woman, being a caring and feeling human being is a shortcoming....apparently having a baby-dick and small hands aren't. Not to say that Bob Corker is someone who needs defending...nah, that asshole had been riding the DOUCHE train for months

Where do we go? The continued fallout over Rex Tillerson calling DOUCHE a fucking moron?  Did you know DOUCHE actually challenged him to an IQ test? Joke or no joke, I think I'd actually pay to see those two inexperienced morons go toe to toe over foreign and domestic policy....hell, i'd love to see them sit there and try to name all fifty states....i'd call it a success if they get 1/2 of them right.

What about Trophy Wife #1 and Trophy #3 going at over who's the real 1st lady?

I mean this is some tantalizing shit we got going on in this week 38 of America: The Reality Television Show.

What about the NFL? First they were all together in taking a knee during the anthem to protest police brutality. Then the fans got angry.  Then the owners got angry. Slime ball Jerry Jones said if any of his players take a knee during the anthem he wants them benched. You know, if i were a 29-31 year old NFL player, had made my money, had my endorsement money....i think i'd take good ol' Jerry up on that threat. Probably be a good idea not to go out there and get your head knocked around for two hours....i was a bench warmer in grade school and i LOVED it...all the free Gatorade i wanted while the rest of those assholes ran around tackling each other.  Of course the icing on the cake with that one....craven NFL commissioner Roger Goddell (or however the fuck you spell his name...i'm too apathetic about the man to look it up...and i'm not winning any Pulitzer for this blog) issued a statement to all NFL franchises that it is expected that players stand for the anthem come this Sunday....guess those TV ratings are really taking a beating, and i'm guessing all those fat white fuckers at the games are protesting by not sucking down a third or fourth Budweiser before stumbling home to yell at their wives because the Cowboys lost again.

Damn you NFL players....why can't you be more like these "patriots" from Picksburg 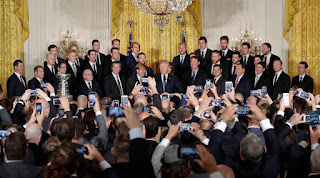 Funny thing is a good deal of the Pittsburgh Penguins aren't even American.....but I guess they fit the profile of good, duty serving white boys the DOUCHE loves so much.  All the same coming from Pittsburgh I have a good deal of bitterness toward the Pittsburgh Penguin organization. There are tons of people out there doing their best not to normalize this Jagg-off's illegitimate "presidency" and doing things like showing up for a phot-op with him undermines that. Whole organization should be ashamed.

but back to the NFL for a moment:

at least Mike Pence knows who his daddy is 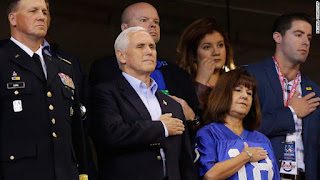 Look, Mike, I know chances are good we're most likely going to be stuck with you as President for a year or so before the 2020 election....but these types of expensive ($200K) stunts...well...they just aren't you. So quit trying to be Trump and go back to being the woman-fearing, gay-hating closet case we all know you are....hey...see you at the Impeachment!

California.  HOLY SHIT WTFF is going on with Nature? As if the Trump presidency weren't enough of a crime against humanity and fate of the world we've had a year full of droughts and hurricanes and hurricanes and hurricanes and hurricanes....and now this....as of Thursday morning, 170,000 acres have burned and 23 people have died....it's known (at least this is what Alyssa Milano told me on the Twitters) that during dry hot years these fires happen with more frequency....but it has nothing to do with climate change, right Trump? Right, Pruitt....you swine! I've never been a fan of California wine (too oaky for this snob) but seeing boiling rivers of it swirling between flames is sickening and shocking....and this isn't stopping any time soon.

But according to DOUCHE we can't leave all those FEMA people down in Puerto Rico FOREVER so maybe some help is on the way.

A lot of people, to use one of DOUCHE's phrases, have made mention of the fact that Trump has offered no comofrting words on the fires in California, and what they are doing to people's lives and their livelihoods....to them I say a solemn....what did you expect? Speaking for myself, if I lived in California and suffered in any way from this tragedy the last thing I would expect would be comforting and kind words from Donny John Trump. Yes, true, typically in these situations a normal president would offer some words of comfort and support....but this isn't a normal president and we've made the consistent mistake of believing that this bastard will wise up and do the right thing. In truth, if this happened to me, and Trump came on TV pointing and laughing at me all the while roasting marshmallows on the embers of my home I'd be thinking, yeah, there's the Trump I know.

Be angry as Donny John Trump but don't be shocked by anything horrible that he does.

How about that Harvey Weinstein sex scandal? I don't talk much about celebrity on this blog other than my love of Miley Cyrus, but I do want to address one thing. The actress Rose McGowan, who has been calling attention to this "secret" for years had her Twitter account temporarily suspended for calling out A-list Hollywood golden boys by name for knowing all along what Weinstein was up to....she gets HER account suspended yet Mr. Grab-em-by-the-pussy-what's-the-25th-ammendment gets to keep Tweeting us right into fucking World War III....the patriarchy is strong in the Twitterverse.

Riddle me this, Batman....if the Nazi-Cheeto-DOUCHE-in-Chief was able, via an executive order, to allow for cheaper health insurance policies with fewer benefits AND sweep away those much needed government subsidies to health insurance companies, why did the Senate even bother with all of those procedural votes? I mean if that piece of shit was able to gut the ACA on his own...why waste our time?

My answer?  Because the Trump Administration isn't government, not in the least....the Trump administration is that croaking ego of white, male patriarchy gleefully dismantling his predecessor's accomplishments....most of which benefited enemies of the Trump Administration: i.e. woman, People of color, and the poor...that said by doing this DOUCHE throws the onus on an anemic congress....it's all about his base, folks....Donny John can do all of this damage and go to one of his Nazi Rallies and say, hey, look....I've fulfilled my promises to you....and he wouldn't be lying...but what vile and criminal promises they are.

On Friday, DOUCHE became the 1st sitting president to address the Value Voters Summit, which if you aren't familiar, just imagine the president of the United States giving a keynote address to this group and you pretty much have the picture: 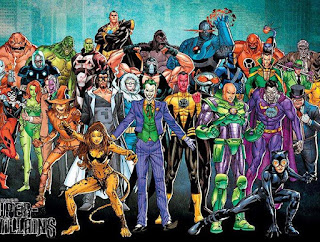 Highlights included Trump's typical bullshit and lies about how God comes over government and how he's saving health care and I quote, how he's "stopping cold the attacks on Judeo-Christian values," which must've been hard for good ol' DOUCHE because the word Judeo....the idiot probably thought he was attending a martial arts tournament. All the same it's official, DOUCHE finally presided over an official hate group.  That's right I called Evangelicals a HATE group.....80% of those white fuckers voted for Trump....and nothing says hate like supporting that sherbet piece of dog shit.

....one more thing....DOUCHE did bring up that whole "We're Saying Merry Christmas again" thing...so in the spirit of that, allow me to wish you all a very early and very happy HOLIDAY.

Anyway...I'm done.  I know i didn't touch on the whole Iran Pact...but i think i, like you, have had enough of crazypants this week

Stick around....we're kicking Trump's ass with the awesome poetry of Jenny Santellano today at 10:30 and tomorrow it's Russell Streur putting down the paintbrushes and dropping some verse.