honestly
i don’t know what everyone is bitching about
i like the idea of alternative facts
they’re federally sanctioned
so might as well get on board
before they take them away like your health care
like…say someone asks me where i’m from
now i can tell them that i’m as new york as it gets
but your parents?
an orphan actually, i can say
self-created and self-made
there isn’t an ounce of me that’s been influenced by somebody else
and all that ass that i got in high school and college?
kind of hard not to get it
when you’re the starting quarterback
class president, valedictorian, class clown
and voted most likely to succeed wrapped up all into one
women and men and all in between just throw themselves at you
i’m a first-class american winner
i was never the shy fat kid with few friends
thanks to the feds i can lock that bastard up and throw away the key
good riddance to that morose nose-picking fuck
did i tell you that i had two thousand people at my last reading
i had them spilling into the streets, mofo
and all of the books that i’ve sold have provided a steady
if not comfortable life here in the top floor penthouse
i only go to the job to keep up appearances
wouldn’t want to seem too boastful
like it’s all nineteen year old models and trips to paris
or is that wrong too?
like maybe i should revel in my luck
never had a day of sickness
never had to care for anyone in need
never had someone i love die on me
never skipped a meal or had an empty pocket
i don’t need to be told a thing about the world around me
i’m, like, a smart person okay?
a walking encyclopedia
a golden god
those bouts of insomnia at night?
that’s just me thinking the big thoughts you’ll never think
and all of those secret tears and labored breathing?
well that’s just the sound of triumph
right before it catches light and breaks on through 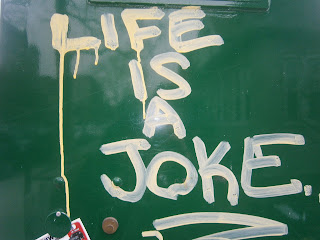