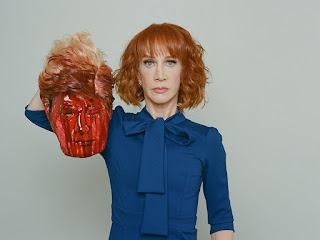 maybe you should still be more offended by THIS.... 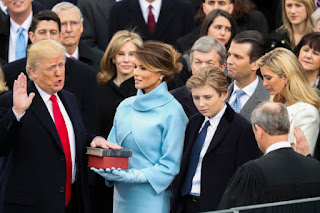 In true celebrity tail between their legs fashion, Kathy Griffin did apologize for the picture.
In my humble opinion she need apologize for nothing....except her career.

That said…according to DOUCHE his 11 year old son, DOUCHE III (pictured above), is having a hard time dealing with the beheading photo….or maybe he just woke up and realized his old man is an asshole and is hated by a vast majority of the population...and the world.

for those of you on both sides who feel this was wrong on Griffin's part go back as far as June 2015
and re-read all of the shit this Nazi fuck has done......then come and bitch about that photo.

Well….the idiot is officially back from being abroad and is back with his precious twitter yelling about fake news and making up words and joking about words and OMG he’s just do funny, that DOUCHE MOTHERFUCKER, I just can’t WAIT until the next season of SNL…maybe by then the normalizing will be complete….seriously, people, there’s isn’t SHIT funny about this. 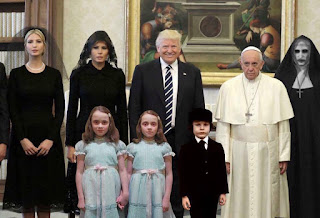 Christ…I know this photo has been everywhere but this is my favorite version….just look at the Pope…it’s almost as if someone told him that women could be priests or that altar boys weren’t priest’s little sexual cherubs for the taking…or that the very foundation of his entire LIFE was founded on made-up bullshit.
Still it says a lot about America and our leadership for DOUCHE MOTHERFUCKER to come home and declare that trip a success. Of course the Saudi’s did give him a medal….they got a HUGE arms deal…but DOUCHE got a medal, he got to touch a glowing orb, he got to have his grubby little hands smacked by trophy wife #2, he got to eat Belgian chocolates, tour the Sistine Chapel, ogle his daughter, all the while prick teasing the G7 summit leaders by not committing to the Paris Accord and making Angela Merkel look like this…. 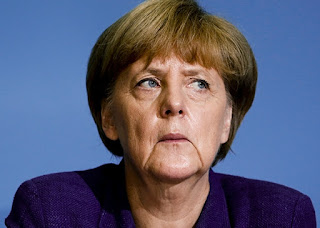 Yeah Angela….if I had to deal with that asshole I’d declare the European Union going it alone as well

Nigel Farage is now apparently a person of interest in the collusion between Trump-Russia-What-Does-it-Fucking-Matter-He’ll-Most-Likely-get-reelected-in-2020-anyway investigation. I believe that this might be the first time EVER that Nigel Farage has been a person of interest to anyone and anything…..from what I’ve read this whole “person of interest” business has to do with Farage’s contacts with people in the DOUCHE campaign and that rapist of all rapists Julian “Ecuadorian Embassy Forever” Assange.  Basically this is just more leak type stuff from an investigation that already seems ten years old and going nowhere.  Personally I’m conducting an investigation into whether or not Nigel Farage is an asshole…..found proof!

To absolutely nobody’s surprise, on Thursday, DOUCHE MOTHERFUCKER, in a rebuke to world leaders, environmentalists, some of his staff, the majority of his own citizens, the citizens of the world in general, and every single living organism from the blue whale all the way down to the Etruscan shrew, pulled the United States, history’s BIGGEST polluters, out of the Paris Climate Accord, thus fulfilling his campaign promise to do so and further solidifying his reputation as one of the most repugnant pieces of excrement on the dying planet Earth. I know I uses the NY Times as a source for a lot of links, but you can learn the details of the Climate Accord HERE, as well as what it would mean for the U.S. to pull out.

here's what the Putin-come-sucking-douche-canoe had to say for himself:

“In order to fulfill my solemn duty to protect America and its citizens, the United States will withdraw from the Paris climate accord but begin negotiations to re-enter either the Paris accord or an entirely new transaction on terms that are fair to the United States,” the president said. “We are getting out. But we will start to negotiate, and we will see if we can make a deal that’s fair. And if we can, that’s great.”

On a personal note in this whole sham….DOUCHE MOTHERFUCKER invoked the name of my old hometown in defending his egregious decision to drop out of the Paris Agreement by saying, I was elected to represent Pittsburgh, not Paris. First of all, asshole, you were elected to represent the entire country. Second of all the Paris Agreement is called so because it was signed in Paris. Third, the citizens of Pittsburgh voted 80% to 20% for Hillary Clinton…but alliteration is alliteration even if said by an illiterate, and invoking the name of a city and using it to hang on a reputation that it hasn’t even had for over thirty plus years simply shows what a fucking relic you are…instead of being president, DOUCHE, you should be hung out to dry with all of your other toxic masculinity cohorts……and keep the name of my hometown out of your dirty mouth, fuckface….enjoy your pussy rally.

Well…Christ…between the Pacific Trade Agreement and the Paris Climate Accord, that DOUCHE MOTHERFUCKER pulls out of things faster than a high school boy too cheap to buy a condom on prom night.  What a nefarious swine. The man-child is 70 years old and wealthy. None of this means anything to him. He’ll be dead and gone before the wealthy are huffing oxygen out of tanks while the rest of our relatives suffocate. There are probably hundreds of examples why this orange-hued, baby-dicked neo-fascist is a fleshy plague upon the earth…but this was a big one. Remember that next time you come across a Trump voter, someone who didn’t vote, or one of those spineless piece of camel dung 3rd party voters.

But what about four years from now? What about 2020? What then? Other than a few well-meaning and well-known geriatrics I don’t see any youthful, strong, original voices coming out of the Democratic party to actually challenge this piece of shit in four years. It still seems to be a diaspora of ideas in lieu of a collective unit. Who’s to say that people will get on board if they throw up more of the same old/same old. What about those Bernie Sanders nutbags? They already drank the kool aid and sniffed the snake oil...you think they'll buy Hillary part II: Electric Boogaloo?
Do Americans even give a shit anymore? And, of course, while all of this is going on what are American’s actually more concerned about….i bring us back to Kathy Griffin and how plastic and ill-thought the outrage is. Anger on both sides at some 3rd rate celebrity isn't helping matters. Or how about this week's new edition to the OED? The word Covfefe, which might just mean that moment of terror that you have daily where you realize that your country is run by madman, that both the House and the Senate are run by member of very dangerous domestic terrorist organization, people who don’t give a fuck about you, me, or really anyone that isn’t in the 1% of the nation’s wealth, and that most people still want to sit back and laugh at all the silly things the Nazi-in-Thief is doing or binge watch some Netflix bullshit while sucking down an iced latte mocha choca merica. Or maybe Covfefe means that moment where our collective rage gets bogged back down into the trivial, the amusing, and the pointless spectacle. Maybe Covfefe means we no longer care about the integrity of the presidency, or our respect globally, or even our own self-worth. Maybe Covfefe means the end of America as you and I know it....hope it was worth the laugh. 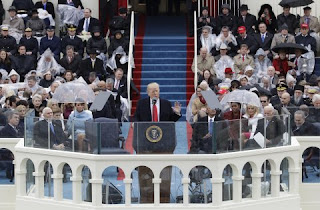 Anyway it’s been another motherfucker of a week under this asshole…week NINETEEN and it feels like this shithead has been twittering our nation’s secrets since Thomas Jefferson turned his eyes away from slaves and wrote the Declaration of Independence for white, male landowners everywhere. But we press on…Do…we…not? Stick around this weekend we have Ally Malinenko at 10:30 this morning and tomorrow we have the poetry of Shelly Blankman.


Oh…and send me some shit….poetry, fiction, rants, photos, this glitch art stuff I’ve been seeing. I’m willing to make an offer….i have a limited supply of my first book of poetry The Noose Doesn’t Get Any Looser After You Punch Out. And while they make great coasters I’m going to offer a free copy of the book (US residents only…and while supplies last) to people who send me at least 3 pieces of art/writing/rants to winedrunksidewalk@blogspot.com please put in the subject line "Trump is a crook, gimme a book," so I can identify those of you participating.