President DOUCHE MOTHERFUCKER finally made his way to DisneyLand...or DisneyWorld...honestly I don't know the difference between the two because I've never been to either and wouldn't set foot. But it might be worth it to see this shit.... 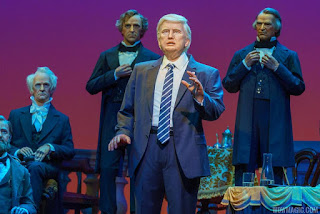 Now I know that dirty rat Disney makes one of these things for each president, and since Clinton in 1993 they have had the current president record a speaking part for their crappily made robot....but for some reason Trump and Disney just fit. I can't think of two entities that spew Nationalist bile and bullshit folksy Main Street America garbage all the while just consuming and consuming the way that Trump and Disney do....and yeah....before I sound like a hypocrite....i saw the new Star Wars and I really enjoyed it. It pains me to give Disney money...but everyone has their price and Millennium Falcons and Rey and Porges are apparently mine.

In what comes as no surprise both the GOP-run House and Senate voted to pass their HUGELY unpopular, un-american, oligarchy, 1% serving Tax Scam bill and most likely will have it to Mt. Crumpet for the Cheeto Grinch to sign right before he heads down to Rama-Dama-Ding-Dong to play golf straight through until 2018, so he can be rested and well-fed and ready to help his lapdog party begin to dismantle Social Security, Welfare and Medicaid......all this means is that by the summer of 2018 Trump base supporters will pretty much have nothing left but their racism and xenophobia to back him with...provided they aren't all off working the 2nd and 3rd jobs they'll need or, you know, DYING, because they no longer have health care coverage...time to start popping the Oxycontin again ma and pa kettle!

But what's left to be said about this Tax Scam that already hasn't been said? It's a complete and utter disgrace. It's the theft of the american people's money in broad daylight.  It's Paul Ryan's world, baby....we just live in it....enjoy your Any Randian Christmas you Eddie Munster looking pea-brained DOUCHE CANOE!

I mean...just LOOK at this grinning group of fascistic corporatists: 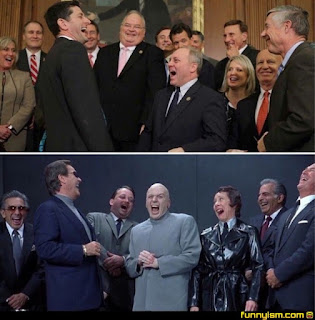 Now....this one is rich.  The U.N. is planning on having a vote on criticizing and ultimately condemning Trump's decision to acknowledge Jerusalem as Israel's capital. Former DOUCHE critic and new lackey/mouthpiece, Nikki Haley told that U.N. that any condemning decision would be taken "personally" by out rapist-in-thief and that the United States will be "taking names" of the countries that vote against the U.S.......oooooohhhh....I'll bet those countries must be SHIVERING in their seats...taking names...like some kind of fucking school yard bully?  What nation in their right mind would feel threatened by Donald Trump?  Shut the fuck up Nikki.

and BOY Trump and his lapdog Nikki really got to the UN too....they ONLY voted OVERFUCKINGWHELMINGLY 128 to 9 denouncing DOUCHE's asinine decision....granted this is a symbolic vote....but a nice FUCK YOU to Trump all the same.   To this Nikki Haley added.

“We will remember it when we are called upon once again to make the world’s largest contribution to the United Nations,” she said. “And we will remember when so many countries come calling on us, as they so often do, to pay even more and to use our influence for their benefit.” 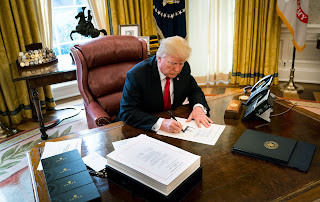 Why don't I just end things with that image of theft at the highest level of government right there.

Today at 10:30 we've got J.J. Campbell and tomorrow at 10:30 I'm going to give it a shot at manipulating and bastardizing a popular Christmas poem.