well....the GOP swine went ahead and did it. To no one's surprise the Senate passed one of the worst tax bills in the history of the United States, and all but handed over the keys to the kingdom to big business and the 1%, in a big FUCK YOU to the average citizen. Remember all of those GOP "heroes" of the health bill.....well three of them anyway....Lisa Murkowski? Susan Collins?  That American hero above all heroes...John McCain?  Yeah....they all voted for it.  Never trust a republican with anything other than trying to fuck you out of something vital...like your health....or the money you and your family need to live.

This tax bill is a scam through and through, and most likely those terrorist GOP swine are going to cut things like Social Security and Medicare to help cover the deficits. But this is what we're going to have to live with because this is what the electorate wanted...they wanted to be swindled all in the name of maintaining their little white supremacy through the mouth of a vacuous reality tv star.And this will happen...at least once Paul Ryan stops looking at himself in the mirror and his hard-on goes down,  and the House is most likely going to tinker with this thing and send it right up to the White House so that fat, orange racist can ketchup-smear the document and put his bogus, illegitimate, Russian-owned signature on it....probably on national tv.

But don't worry Paul Ryan already has a plan for fixing the big ol' deficit hole in the budget....by tackling those pesky "entitlements"like welfare in 2018. Yes, like a reverse Robin Hood, Paul has a plan to rob from the poor and give to the rich.....you know....I know Paul Ryan wasn't on board with Trump even though he acted like a spineless weasel through  most of 2016 and for these 46 weeks...but I feel that these past two weeks have really emboldened America's #1 Ayn Rand fan. Fucking over citizens at the expense on further enriching the already wealthy has put a spring in Paul's step that I haven't seen since at least the spring of 2015, before Donny John slithered down is escalator to add that shit-stain of an addendum to Reagan-era GOP politics....I'm sure somewhere Paul is back to mansplaning feminism to women or telling people of color that he knows what its like to black.

On Sunday DOUCHE MOTHERFUCKER went on a tweeting rampage against the FBI, claiming the organization's standing was now the "worst in history" and that basically the FBI was in tatters and that Christopher Wray should "clean house," coinciding with his usual, nonsense rants about Comey and Clinton blah blah blah.....yeah, I guess if every single person that I knew was currently being investigated by the FBI for collusion with Russia I might not have a good opinion on the FBI....but it doesn't mean that I'm right.  And Donny John is rarely right.  But as is common these days, former and current FBI folks came out the woodwork to rebuke DOUCHE and his litany of tweets.

....which is better than the RNC is doing considering it reinstated its funding and back of known sexual predator Roy Moore a few hours after KING SEXUAL ASSAULTER DONALD J. TRUMP gave Moore his full endorsement...even Mitch "kentucky neck" McConnell backed off his criticism of Moore by letting the voters of Alabama decide.

Folks....I haven't been to Alabama.....I don't plan on ever going to Alabama and, in fact, a few years ago I decided to no longer spend a dime ANYWHERE below the Mason/Dixon line (sorry New Orleans and Nashville...we had fun, right?)....but based on what I've seen Republican voters in Alabama shouldn't be allowed to decide what ice cream flavor they want let alone who should win their Senate seat.

Look...I'm not surprised Trump finally backed Moore 100%. Moore was Bannon's man and Bannon is Trump's ideological daddy....plus I'm told rapists stick together....but the GOP....it's like they almost want to do something decent....but they just can't help themselves.

That said....the GOP is winning December like fucking gangbusters....they've completely and 100% sold what remains of their soul, and it is my hope that they lose badly and 2018 to the point where they almost cease to be a political party....because in 2017 aligning yourself with the type of pond scum that quasi-human beings like Roy Moore and Donald Trump are, all the while passing draconian tax and health laws that benefit NO ONE but the 1%, all the while quietly endorsing white supremacist policy.....well...you fuckers should have to pay....and pay dearly.

But for now....it ain't nothin' but a gangta party up on Capitol Hill and the White House...on Monday....a banner day already for the week....DOUCHE announced that he would be reducing the size of the Bears Ears National Monument by 85% and the Grand Staircase-Escalante by half. Why?  To open them up for development of course....you see...the GOP just isn't interested in killing health care and bilking millions of citizens....they also hate the environment....it's very American these days to hate the environment....i mean....why have acres upon acres of open land....when you can have McMansion developments sitting right next to golf courses right next to oil refineries

....this is what passes for progressive thought in Republican circles in 2017

Also----thanks SCOTUS for also no longer being above partisan politics and for being just another bullshit, shady branch of the United States GOVERNMENT

Back to DOUCHE for a moment....on Wednesday Donny John declared that "It is time to officially recognize Jerusalem as the capital of Israel," which, aside of being surprised that Trump can speak in a complete sentence, this moves breaks with seven decades of U.S. policy in regards to the controversial city, was condemned the world over, and just might damage any U.S. investments in the Middle East for years to come, while, at the same time, unleashing more violence...well...I have to hand it to Trump....his presidency is one shit-show for the history books...but damn if the man isn't good at finding new and improved ways to piss off almost...well....everyone. Trump EXCELS in douchebaggery on the global stage like few that I've ever seen before him. I mean pissing off the Pope, the UN and the European Union all in one stupid sentence spouted out by that orange-colored dotard.  That said....i sure as FUCK wouldn't want to work in the U.S. Embassy if it gets moved from Tel Aviv to Jerusalem.

My thoughts are with the people of Palestine....because this means open season on their land. and most likely violence upon thousands of their bodies.

Trump is a cruel Islamophobe to his rotten core....but he still has his fans, right?  Yep, on Friday, as a final fuck you to what has been  horrid week for Democracy (until Trump fires Mueller and the GOP sighs), the president of the confederacy had one of his Nazi rallies in that bastion of rational thought, Florida...about thirty miles away from the boarder to Alabama. Yes, to loud cheers of "we want Roy Moore," DOUCHE MOTHERFUCKER gave one of his speeches about how smart he is and how great the economy is, and how he wishes everyone a Merry Christmas

On that note....let me be the first to wish you all a HAPPY HANUKAH and a HAPPY KWANZAA and a wonderful WINTER SOLSTICE

the Rapist-in-Thief also made it a point to mock one of the women that Roy Moore assaulted....when she was a teenager

Let's just let that hang there for a moment shall we? While we stare at a nice picture of Satan Claus that looks a touch like Bannon: 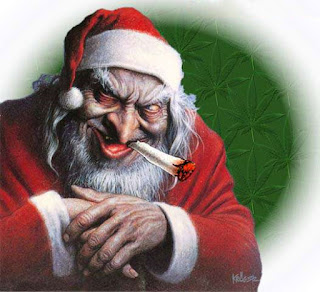 Lastly....I've accept that Al Franken had to go. You don't have several accusations of sexual assault against you and get to sit on those Senate committees making Jeff Sessions shit himself....although that was fun to watch. But I hope this moral high ground that the democratic party is taking is worth it.....because on the other side of the aisle you have a party of monsters who do not care that their president, the leader of their party is a rapist, is a man who ogled ten year old girls as they went up the escalator in his shitty building. You have a party, from the ground up, who have made accuse after accuse for why they are backing a child molester for Senate, a man who was banned from a fucking MALL for christ sake, in an effort to protect teenage girls from him.....that's your Republican Party...a party that is willing to toss democracy aside to pass their draconian agenda....a party that is willing to overlook the pain and suffering of dozens of women to pass their draconian agenda....a party that may not, in 2017 and beyond, even give a flying fuck about the tenants of democracy if a single aspect of it gets in the way of their unfettered capitalism.

What would Jesus do? You ask, you bullshit Evangelicals?  He wouldn't vote Republican.

So keep taking the high road Democrats....I'll gladly stay down here in the dirt where i can face my enemy eye to eye....but, sadly, you still have my vote....Lord knows I haven't lost enough brain cells to vote 3rd party.

I hope your moral high ground stays afloat under the Trump/Moore wave of tyranny.

Anyway.....between Tax Scams and Rapists running the country and wildfires burning down Southern California....it can only go downhill from here, right? Hell, even I was tinkering with ending this blog after one year....but we simply can't let these bastards wear us down.

so stick around...we have the poetry of Steven B. Smith and tomorrow at 10:30 we got another great one from William Taylor Jr.