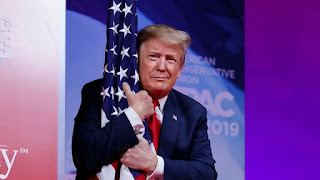 I'm no patriot....not even close. But even i was a touch sickened at the image of this pig-fucking racist hugging the flag. I shouldn't have been. While I don't normalize the orange fuck, his displays of bullshit patriotism have become more than commonplace. What's the phrase? Patriotism is the last refuge of a scoundrel?

Anyway...my point. This July I'm going to try something new here at the blog. Going to spend the month posting images of the flag that I, and hopefully a lot of you, will take. This isn't a nationalist project or a patriotic one, but simply an artistic, philosophical look at an image that unites and divides so many of us.

I also think this project is a good way to get people involved in the blog, in what we're doing here; people who don't normally make art but take a look at this blog.

so....send me your flag images. The flag standing erect. The flag on a bumper sticker. A bunch of tires outside a Firestone painted, red, white and blue; some dipshit at a street fair wearing a flag t-shirt. Snap a photo and send it to me with the heading: Flag Project 2019.


on looking for somewhere else
to buy my apples and oranges

never trump?
but what does that mean?

exactly what it says i say

she says
but i don’t understand

i look at her hijab and think
how can you not?

but there i go making assumptions again

she says,
never trump
then turns to the cashier behind her
who’s wearing a big american flag on her breast

and says,
selma, selma
look at his pin

hmmm, she finally says
then puts her head back down into her phone

choking the lifeblood out of me
again and again.