day ONE THOUSAND and FORTY

It was a woman selling churros,
in Brooklyn
and last week it was a man eating on the platform
in San Francisco.

Men with guns gather at the bottom of the subway steps,
crowded in packs, looking lean and wolfish
the have a wide stance and a hard laugh,
they block doors
as the rest of the city tries to catch the train home.

We just want to go home.

A video appears on my phone
four more cops wrestling a fourteen-year-old to the ground,
knees on backs, his feet twitching in his shoes,
the penalty for selling chocolate for his school,
the hard, barking demands for identification.

I look around the subway car,
and wonder what child
has identification?

In response, the police issued a statement
saying the man refused to comply

I look around the subway car
and wonder in what world
is a fourteen-year-old
a man? 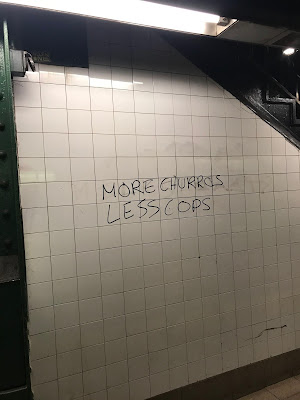 Photography by Ally Malinenko
Posted by John Grochalski at 12:00 AM