"Concepts are drawers in which knowledge may be classified; they are also ready made garments which do away with the individuality of knowledge that has been experienced.  The concept soon becomes lifeless thinking since, by definition, it is classified thinking."

Fourteen years ago, late August, 2002, in Venice, Italy for an N.Y.U. masters degree, I had my final thesis critique with Doctor Angiola Churchill.  The work expounded a theory that plastic was 'plasma of the metaphysical'.  My idea being raised by baby boomers in and around plastic engendered casting it aside for new knowledge her tutelage gave in the milieu of Italian culture.  I'd taken to utilizing a blowtorch in order to melt various army men toys into myriad, conglomerate forms.  The culmination of eight weeks taking myself very seriously using the buzzword, 'globalism', was a hollow sphere made from armies of small men in plastic.  A day before the all important moment of her seeing this creation, a studio hand accidentally knocked it down damaging the integrity of the piece.  His shame and apologies belied my anger; life at that time was in a state of high entropy and the action was in accordance with a synchronicity that I found appealing.  There in the studio at review, knowing the woman as only an instructor, hunched over, hand jabbed palm-up over her mouth, she listened silently to my rhetoric.  When I said nothing more, Churchill reached out, held the sculpture aloft, and placed it on her head snug.  Sitting back, arms crossed up behind her, lounging and kicking up her legs to be crossed, that twenty seconds was one of the heart-stopping moments of my life and I thereafter fell hopelessly in love.


By February, 2003, I was avidly searching for a way to manifest ideas in art.  I made effort to actualize working studio space and pursued what was a limited career acting off off (off) broadway.  I stayed the course as a third year art educator in East Harlem but chaffed under the yoke.  Fellow N.Y.U. graduate, Stacy Gibboni, whom I met studying abroad, was making a play at moving to New York City.  Engaged in the art form of fashioning herself for reinvention, as only she could, Gibboni was to me a placeless goddess and aided my becoming less a regional entity, in exile on the upper east side.  Our cosmopolitan exploits operated out from the studio of Dr. Churchill, who put her up for the time she needed in order to sort through the theatrical backdrop of life and times.  Eventually, the city, so demandingly beautiful, could never be a neutral setting, and Gibboni took to the shapes of Italy which fit into her work.  With consistency and discipline it is to Gibboni that I owe great debt for bringing me to Churchill's table before leaving.  She gave me inroads to winning the affinities of a working artist, and the ethics involved with being an adult.


Before macular degeneration made her only world gentle movements and whisperings in the studio space, Churchill was a deliberate, dominant form in the lives of those who crossed her path.  At once organic and geometric in all things, she was for example as consistent and disciplined in food and its preparation as she was to anecdotes that went with each dish.  All this energy synthesized when she made art.  As well, her sartorial elegance had the same intensity that lines in the work did and I became gourmand to it all.  With Churchill there was sufficient intellectual stimulus, refuge from the disappointments of conventional life, and entree into an association of like minds.  The even flow in and out her door of intellects and otherwise was standard grammar.


Engaged with 'Churchy' on any level, from sublime to banal, with humor or severity, it behooved one to know their history.  Walter, her husband, was in need of constant care and occupied the space as a sort of laconic sidekick, counterpoint to her savoir faire with deadpan accuracy.  Gibboni and I were often tasked with bringing in certain food he liked (crabcakes from Dean and DeLuca or Hagen-Dass ice cream) and stayed with him at the table eating, hearing about his favorite books and stories provoked by old photos Gibboni would dig up, framed by the title, 'it feels like it happened in a different life'.  There was a feeling not only that the two were history, but that your presence was syntax in its analog trajectory.


Eschewing the pregiven of an everyday world, I found myself spending more and more time in her studio romanticizing a leftover, near-abandoned quality of 20th century life that the place exuded.  Harmony between her plan for things and the process in order to make them fit into the grid of her studio space… demands were obstacles to overcome with democracy and justice.  It suited me.  Before then, life as an artist was caricature… Churchill helped me find a character in it instead.


Churchill's own artwork was at that time something less of painting but more of art; tactile, to be sure, and of a body growing from what had been installation toward non dictatorial, high abstraction.  Her post feminist modular units required manufacture and It was natural I participate in making them.  Garnering a label of assistant was appealing.  I rather liked the idea of 'apprenticeship'.  It counter balanced my teaching and the agony of a slowly burnished truth: that there were problems with the New York City Public School Education System.  I was finding in that career enthusiasms were fabricated, and the fabrication of them took more energy than I thought.  She answered the question of this dilemma with great concentration, determined for brevity, handing me a book she wrote on the subject, saying, "I've cried bathtubs of tears over this".


After a long workweek teaching, on Friday the seventh of February, Gibboni invited me to join her at an opening in Chelsea for Churchill.  Judy Collischan, her stalwart ally, organized an event in tandem with fashion week, to take place on 24th Street at 4 P.M. and invited Churchill to show a dress that she had made entirely out of paper forms that were vernacular to her work.  There had been a fresh snowfall that day and the world was covered in perfect white which mirrored the sensibilities of Churchill's emblems and iconography.  Other participating artists wore outfits they each made or had got models to do so.  Gibboni had on Churchill's dress and when things were dying down, after a culminating performance that involved singing, in an act that was sea change for my relationship to Churchill, suggested I put it on.  A hit, I sang 'Mona Lisa' to her in front of everyone, and she called me 'the warrior'.  I certainly considered it inverse retribution for she who wore my art first.  As fate had it, under the celestial vault of Gibboni's machination, I was thereafter to don the mantle of all things 'Churchill'.


My father died later that year on August 4th and Walter passed away on Saturday, September 20th, soon after she returned from the eight week program.  We became spiritual siblings, bound by that loss and together fostered a dialectic relationship between ourselves and the world.  I had taken a sublet apartment on the lower east side and when that fell out from under me, very easily moved my garbage bags of clothes into her guest bedroom to stay.  I was 27, she was 81.  We made an experiment in divesting domestic bliss for a live/work pattern.  I could return to her from the causal, ordinary world of daily bread and butter routine and she became bedrock for a life of ideas.  Churchill fostered and engendered my professional development as not merely an 'art teacher', but in the long run, an artful one; to understand the structure of the outfit of an artist-teacher.  I manifested childhood tropes so fervently rejected in my graduate work.  She was Puff the magic dragon, a Jedi master, and the villainous antagonist I had always wanted.  I turned the place into an epicenter for the magical realm of my adventures… and they were real.  I was the warrior-prince-trickster-door warden.  She let me make myself into a sorceresses apprentice.  It sustained me.


Ultimately, we were aristocrats in postulating the male-female relationship but would generously share this marvelous, improbable first stanza in the poem of ourselves and how we met.  It was sensual and symbiotic.  I lived with her for eight years.  She wore the pants.  On her arm, vestiges of culture we tried on together were custom made; the entire planet earth was our haberdasher.


After all this time I still feel as though I only ever did her a favor by it; that dress, her oeuvre… it was she who had merit in naming me artist and suffering the consequences.  I am wiser for the ware.  She remains herself; bitter with experiential knowledge.  Although I loved her first and then came to her abstraction, now I know that abstraction comes first.  I love her still and there is a thing in that concept that I am ever grateful has yet to be classified.  Angiola Churchill makes my life and its art better… in turn, if asked I can proudly say, "I was big in the eighties"… not the eighties, Churchill's. 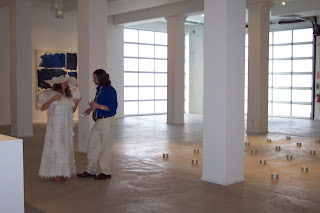 Gibboni in the dress talking with me 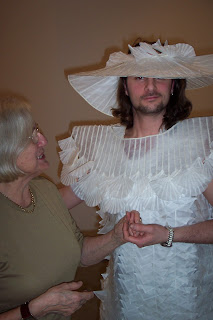