As of this writing (Tuesday morning, 5:19 AM) there are 10 people dead as a result of the devastation brought by Hurricane (now tropical storm) Harvey....and those are just the people that we know about. In what is being considered one of the worst storms ever in American history, Harvey has dumped in its first four days ALONE over 2 feet of rain in the Houston area, flooding and changing the landscape of neighborhoods. To be honest a shit blog like this can't even began to report on what is going on, especially as much of this is still happening in real time...so i present what the NY TIMES had written about the storm thus far, and will continue with update throughout the week.

So let's focus on what this blog is really about......our man-child president. And what was good old DOUCHE MOTHERFUCKER doing hiding away at Camp David as Harvey struck? Yes, he did tweet about what a great job the Texas National Guard was doing, and he made sure to let everyone know that he was wearing his big boy pants and attending cabinet meetings about the Hurricane....but good ol' POTUS 45 also took time out of his busy schedule of fixing and winning things to retweet article about antifa protesters and people defending his craven pardon of Joe Arpaio. What else? While rain was pummeling Texas and causing damage that will take YEARS for the state to recover from, DOUCHE was also tweeting about....his wall...and Mexico paying for his wall....oh, and he bragged about his election victory......and he managed to plug David A. Clarke Jr.'s book....i will admit DOUCHE did throw in some tweets about the Hurricane but they seemed more in line with a 5 year old boy seeing his first giraffe at the zoo....i mean who get excited by a storm bringing about what "some experts are  now calling Harvey a once in 500 years flood!" I mean he actually used an exclamation point......yeah, like remember what Obama was all excited tweeting about that BP spill and walking around the WH with a big boner about it? Me neither.

But not all Trumpian douche baggery has been lost to Hurricane Harvey...on Monday DOUCHE found the time in his busy day of tweeting, reading Joe Arpaio's love letters and planning his next golf outing on the tax payers dime, to reverse another Obama era restriction...this time good ol' DOUCHE is going to allow police departments to once again get their hands on military surplus, thus rescinding a ban on this practice that Obama set in 2015....i don't know about you....but i live in NYC...and at least once a week i'm in a subway station or i'm walking around, and there a cops strolling around with military gear and machine guns (for some reason blonde southern tourists LOVE to take photos with these guys) and, to be honest, i don't feel an safer...in fact, most of the time it makes me feel as if i'm living in a military state...i'd like to see cops in LESS military gear and not more....although i guess there's something to be said for tanks rolling down your street...i'll have to check with Putin or Kim Jong-un on that one.

Speaking of...those two crazy cats are back in the news. Fist, Kim Jong-un and his regime successfully fired a missile over Northern Japan causing the government in Tokyo to warn residents to take cover, and those dudes working the Doomsday Clock to finally throw up their hands and say WTF? On the Putin end, reports are coming out with Trump associates with close ties to Putin arguing with Trump's lawyer back in 2015 that a deal to put a Dark Tower in Moscow might be all the clout DOUCHE MOTHERFUCKER would need to become president in 2016...boy, they didn't even need a tower...they just needed fake news aggregates and 60 million philistine, racist American citizens waving their flags to get that job done....USA! USA! USA!

You know i used to think that only white boys who tried to act all Hip-Hop like looked like Douche Bags in baseball caps..... 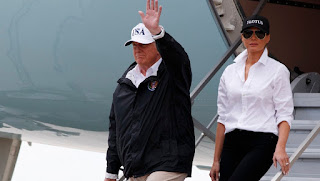 Wrong Again!  that said the Grand Wizard and Trophy Wife #3 did, in fact, land in Texas to survey the damage from Hurricane Harvey and to take photo opts so that DOUCHE looked presidential and, maybe just maybe, raise his approval ratings....and you know what? I'm not a betting man but all this orange-shithead need do is the bare minimum and say a few cognizant words, form a complete sentence that doesn't seem ENTIRELY boastful and like he single-handedly saved Texas from the hurricane and once again the press will treat Trump like he's finally FINALLY being the president we all knew he could be...until he's back in Washington tomorrow retweeting Nazis and calling Mitch McConnell names again....and how about FLOTUS? the above picture shows her more casual than the tight jeans, fuck-me stilettos she arrived in.....look, i know a lot of people made a big deal about Trophy Wife #3's shoes....but, seriously, don't. i mean why pick on her for something as stupid as that. It might be better to pick on her for staying silent and silently married to a fucking Nazi...you want to pick on Melonomia for anything, pick on her sleeping next to THAT orange piece of excrement every night.

Also....way to turn your visit to Texas into a Trump Rally, you self-serving prick.

As of Tuesday into Wednesday it seems Harvey has shown no signs of slowing down, continuing to drop record-breaking rainfall over Southern Texas, and the storm has doubled down by hitting the coast of Louisiana in places that had already suffered Katrina in 2005. I've read reports of at least 30 confirmed dead now. DOUCHE, on his little fashion visit to Texas, said that he and his administration wanted to do it better...i'm guessing better than Bush.....well, okay asshole...give it go.. I haven't checked my Twitter feed yet (I like to keep as clean as I can for as long as I can), so I don't know if this is true or not but I'm sure the minute DOUCHE heard record-breaking in regards to the rainfall he was ready to tweet away with all those !!!!!!! marks he uses when his baby-dick gets a hard-on.....because everything is HUGE and RECORD-BREAKING under this climate-denying asshole.

While residents in the states of Texas, Louisiana and Mississippi, many of whom are Trump voters< spent Wednesday into Thursday putting up with all of THIS our global embarrassment of a president was in the red state of Missouri laying the groundwork for a tax plan that will make CEOs harder than they've ever been without the help of Viagra all the while pretty much telling the ever-dwindling middle class to sit on, and those wonderful working class voters (also many of whom are Trump voters) to basically fuck off and die.....a 20% cut in the corporate tax rate? Really? REALLY? You orange-basted 1% motherfucker.

Tweets like DOUCHE STILL GOING AT COMEY......i mean good christ, you orange menace, as of Friday, there are FORTY SIX people reported dead from Hurricane Harvey....i'd say have you no decency....but we all already know that you don't, you son-of-a-bitch.

And for the record, FBI, right-wing, Trump nuts....stop comparing Antifa to those Nazis from Charlottesville.....i understand you all need an enemy, a bad guy, but Antifa mean Anti-FASCIST something we all should be....even you Mr. Trump.  But for you ignorant pig fuckers who still don't get it....a primer:

a couple, final developing things in another tragic week in America:

1. Mueller apparently has the original letter that DOUCHE and his sycophant little bitch Stephen Miller wrote to Comey in regards to his firing....that should prove for interesting reading

2.  Reports are out there that election hacking was way more widespread than imagined....my homies over at the NY Times reported THIS ....honestly, at this point, if that shit-head racist resigns we should DEMAND a new election and not like that weak, little i can't be in a room with a single woman i spread HIV in my own state, piss ant, Mike Pence, anywhere NEAR the presidency....i say do over.

well...that's it for me. I'm off the radar next week.....gonna try something different. Today at 10:30 AM we have two for the price of one...i kid, but two timely poems by poets that I'm personally a big fan of ( not that i dont love all you folks who have been awesome and contributed...except John Grochalski...i usually don't bother when his shit is on here) Matt Borzcon and Alison Stone....but tomorrow at 10:30 AM we have our first WineDrunk SideWalk: ShipWrecked in TrumpLand spotlight.....major contributor Jason Baldinger is going to get five days to show you why he's the hardest working man in poetry...and the great JB will also be handling the duties of the week THIRTY THREE wrap-up.