i don't know about you folks out there but, to me, nothing says patriotism and "america first" like siding with Vladimir Putin over our own intelligence agencies and then finishing off your Idiot Abroad journey by meeting with a murderous thug like Rodrigo Duterte and declaring that you have a "great relationship" with him.....well...i guess it's the old adage that mediocre autocrats tend to think alike.

Maybe I should just keep my mouth shut and wait on the next mass shooting. (I wrote this the morning of the Rancho Tehama shootings and I'm leaving it on here just as a reminder of how sickly predictable this failing nation has become).

But speaking of pig fuckers.....Roy Moore.....what are we going to do about Roy Moore, America? As of this writing a fifth woman has come out to accuse the GOP senate nominee of sexual harassment when she was under the age of 18. (ACTUALLY AS OF THURSDAY MORNING I DO BELIEVE WE'RE UP TO NINE NOW). Look, I know this is Alabama, and most of the people from there are married to one of their relatives and can probably count a cousin or two or a farm animal as a viable ex....but we've got laws in this country folks....and most of them, i think, state that you don't assault or sexually harass a woman when she's under the age of 18....this is America....we're only allowed to catcall and shout abusive things to women under 18.

but Roy Moore....i tell you....this douche bag already had an impressive list of 'achievements" before all of these accuser came out.  A little background on Roy the Assaulter? Roy Moore is a staunch evangelical christian which means that he hates women, hates people of color, hates Muslims and liberals and anyone who doesn't want government to comport itself as if it were an organic and democratic body of government. Moore is a theocrat.  Roy is virulently anti-gay, hates same sex marriage and like to give gay parents are hard time by labeling their "homosexual conduct" as detrimental to children...but I'll bet that he likes a good action film where the body count is nice and high.  He was actually removed by a judicial ethics panel for not taking down his bullshit ten commandments plaque....and in his spare time Roy Moore likes to espouse upon the threats of Sharia law taking over America....when he isn't writing his comically nationalistic and racist poetry.

Now.....I understand that Roy Moore wasn't the GOP first choice for the senate.....BUT after he won that primary they'd pretty much shut their mouths about Roy...i mean why say anything when he's up 10 points in polling? Then the sexual harassment charges happened...and Mitch McConnell and those moral stalwarts in the GOP have begun making noise about how Roy Moore isn't fit to be in the Senate...how he doesn't uphold the moral values of the Senate

That's all fine and dandy....but I'd like to take a poll of GOP senators....i'm curious how many of these fine and upstanding moral stalwarts voted last November to put a racist, sexist, xenophobic reality TV star nutbag with a rape allegation and at least 11 sexual assault claims against him, into the highest office in the land.

And let's not kid ourselves about Mitch "believing" the women. If Roy Moore was the accepted GOP candidate and not some hick mouthpiece for Stephen Bannon's Neo-Nazi platform, Mitch and Co. would be doing everything in their power to cast blame upon the victims here....If Roy was the GOP man you'd be hearing stories and tall tales about promiscuous young women, about the sexual culture of the time, and about the loose morality of one specific gender.....I mean, honestly, FUCK Mitch McConnell and his bogus moral grandstanding.  Roy Moore shouldn't be a senator. Hell, he shouldn't even be a citizen....but save it Mitch....save it GOP....you are the problem here.

For those of you who still think you live in a democracy and not a cartoon dictatorship in a third world nation  run a muck with the iPhone X....word on the street is that the Justice Department is looking to open an investigation into the Clinton foundation and whether or not they accepted donations in return for the Obama administration allowing a Russian nuclear agency to purchase Uranium One, which was/is a company that was allowed access to uranium in the United States.

First of all this is bullshit. Second of all....this is bullshit. Third.this is also an attempt by the DOUCHE administration to insert itself into the justice system like some kind of third world strong man to punish political rivals.....motherfucker has been spending too much time licking Putin's balls. What this also does is it gives Jeffy the racist Sessions as chance to maybe compromise current special investigator Robert Mueller, as he was FBI director at the time....that said....I believe in his lie-filled confirmation hearing that Jeffy the Racist said that he would recuse himself from any Clinton investigation.....let's see if that happens.

but...the GOP man....liar, criminals and thieves....every last one of them. Party beholden to oligarchs who couldn't give a FUCK about democracy.

Like using a tax bill to remove the Affordable Care Act mandate.....christ, the GOP will try any and EVERYTHING to screw people out of healthcare. Can't actually get your party to vote to repeal and replace? Don't actually have a clue WHAT to replace the ACA with other than YOU....Poor Person...DIE? Why not add it to the tax bill?  Or maybe get together that infrastructure bill that DOUCHE was talking about during his Nazi campaign and kill the ACA with that? Nah, but that would never happen. An infrastructure bill? The GOP doesn't improve things like that....unless the Koch Brothers say so.

I guess I should mention that Jeffy the Racist was in front of another House Judiciary Committee again this week not remembering Russia....or things were too hectic trying to get a rapist Nazi elected president to remember....or Jeffy was too busy making the Keebler cookies to remember....honestly this hillbilly, midget racist lies so much these days its getting harder and harder to tell when he's telling the truth......Jeffy is from Alabama, right? Explains a lot.

In a week where more gropers and forced kissers and possibly even rapists have once again come into the national consciousness....the Keystone pipeline has sprung a leak...a 210,000 gallon leak.....i'm just gonna let that one sit there for a minute........

on thursday this pack of assholes passed their oligarch-boner causing tax bill in the House: 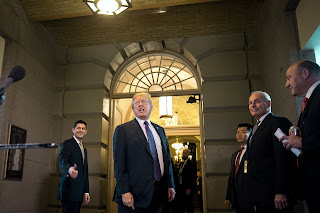 But the word is still out on whether or not this gilded baby has legs in the Senate.

One last.....I was a disappointed as a lot of people to have Al Franken added to the rapey/gropey/douche bag club....but it was the height of irony having good ol' Donny John DOUCHE Donald J. Trump mocking him on Twitter......so I'll say this b/c I know Donny John is an avid reader of this blog...it makes no sense, you gilded, Cheeto prick to mock someone when you yourself have at LEAST 11 women claiming sexual assault against you and when your first wife actually claimed that you RAPED HER......prick.

Anyway...another week in Red White and Blue nationalistic hell has come to a close. Stick around...if you dare....I'll be your 10:30 am dalliance with poetry today and tomorrow at 10:30 it'll be the great Ally Malinenko.

Send me your poems/fiction/essays/art/rants so we can keep this thing going.