This past Fall I co-curated an exhibition in Lisbon, Portugal, Tributaries, that opened on Sept. 30th and ran for ten weeks, under the auspices of the international artist's cooperative, Urban Dialogues. While in Lisbon, I went into the oldest continuous bookstore in the world, Chiado Bertrand Bookstore, that was founded in 1732 (the year of George Washington's birth). I found this Portuguese published book about Donald Trump that I immediately bought because a redacted title of the book jumped out at me, O Me Too. 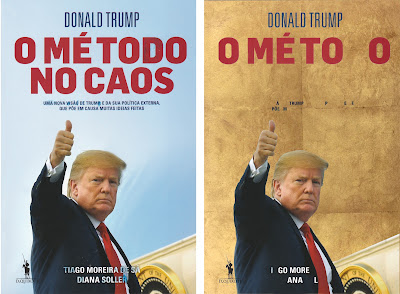 
Mark Blickley is a proud member of the Dramatists Guild and PEN American Center. He is the author of Sacred Misfits (Red Hen Press), Weathered Reports: Trump Surrogate Quotes from the Underground (Moira Books) and the forthcoming text based art book, Dream Streams (Clare Songbirds Publishing House). His video, Widow's Peek, was selected to the 2018 International Experimental Film and Video Festival in Bilbao, Spain. He is a 2018 Audie Award Finalist for his contribution to the original audio book, Nevertheless We Persisted.
Posted by John Grochalski at 10:00 AM