day EIGHT HUNDRED and EIGHTY ONE

Just a reminder before today's wonderful poem that July begins WineDrunk's FLAG PROJECT, in which I'll be posting submitted pictures of the American flag/American flag-ish images that people send.  If you're looking for an idea as to the scope of this and how creative and out the box you can get with your submissions, I offer this humble example: 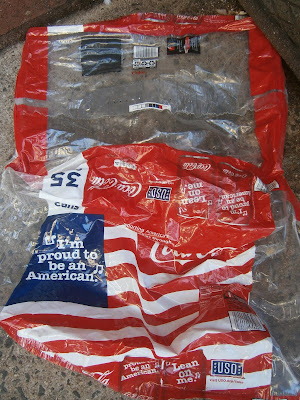 Looks kinda like a flag, right?  Honestly, I'm just curious about the various incarnations of the flag (and there are a ton) that we can come up with.  The hope is to see the usual contributors, new ones, and even those of you out there who read this protest blog but feel you've been unable to contribute....your neighbor painted their car RED WHITE and BLUE....take a photo of it and send it my way.

For those of you sending/already sent poems to me, I will begin with the poems again come August 1st.

Also to keep in mind....because we never properly acknowledge labor in this country but instead pollute our Labor Day with Labor Day sales/Bullshit Barbecues, in September i'm going to post any poems that people send me about work...your work...the work of others...anything that keeps this Capitalist system afloat even under 800+ days of an idiot racist game show host....so keep that in mind as well.

thank you all for contributing and reading/viewing the great work I've had the honor of putting on here for EIGHT HUNDRED and EIGHTY ONE days.

There is nothing
sexy about politics.

It drags on forever, while
I stare at the ceiling.

Just when I think politics
can't continue much longer,
it finishes abruptly,
rolls over on the mattress,

and goes to sleep, then grunts
and snores with tortured gasps.
I try desperately to rest,

while I lie with my ass
in the puddle.

One day I will leave
politics for good,

but for now, I am beholden
and need the security.
I roll on the sagging mattress,
twist my pillow against my ears,

clench my jaw
until the noise subsides.

I have no other place to go:
just this uncomfortable bed
with no promise of improvement,

and the morning is years away.


Leah Mueller is an indie writer and spoken word performer from Tacoma, Washington. She is the author of two chapbooks and four books. Her next two books, "Death and Heartbreak" and "Misguided Behavior" will be published in Autumn, 2019 by Weasel Press and Czykmate Press. Leah’s work appears in Blunderbuss, The Spectacle, Outlook Springs, Atticus Review, Your Impossible Voice, and other publications. She was a featured poet at the 2015 New York Poetry Festival, and a runner-up in the 2012 Wergle Flomp humor poetry contest.