First of all….i’d like to thank the talented and thought provoking Jason Baldinger for handling the wrap up duties for Weeks FOURTEEN and FIFTEEN whilst I gallivanted around the U.K. getting fat on dry cider. Short of one bartender mocking my american accent, the trip wasn’t bad…and honestly where else can an american go overseas but the U.K., considering they most likely fucked up more than we did with this whole Brexit business.

Before I begin I just want to say….VIVE LA FRANCE!! I never thought I’d be this excited for the continuation of neoliberal policies but after 110+ days of living under an infantile tyrant with small penis syndrome, I jumped for joy at hearing the news of Emmanuel Macron’s victory over France’s leading Nazi party. SURE, nearly 34% of the population voted for a Nazi…but 46% of our population voted for a racist, sexist, misogynistic, illiterate, orange hued philistine (and he won) so why not?

Sailing into Tuesday evening, man, I thought that I was going to have an easy one this week. Mock Marie Le Pen? Check. Praise Sally Yates? Check. Dust off the Ted Cruz jokes? Check. Call the GOP a domestic terrorist organization and further deconstruct their horrible “health care” bill? Check. Throw in a few Michael Flynn references…and I was hoping to glide right on into Week SEVENTEEN in this crumbling empire…but NO….James Comey had to happen.

Gotta love the DOUCHE MOTHERFUCKER administration…their ability to release startling political information at the end of the day has to be one of the few intelligent things that they do. Let’s take a press whose spent the day covering our insanity, let’s take a populace tired from their jobs, bludgeoned by our ineptitude, people who just want to go the fuck home and put this day to rest….and just drop a fucking bomb on them. Don’t believe me? Pay attention. Most of DOUCHE’s bombshell bullshit happen between 5 and 6 p.m. on an almost regular basis (I’m not counting the fucktard’s 3 a.m. tweets…those are for his European audience). I’m assuming that this is done in order to scramble the press into overdrive and to allude the average citizen whose going home to shop online, eat a microwaved dinner, stream some bullshit, play video games, social network while they ignore their children or watch something with a Kardashian in it. It’s almost masterful.

Is the firing of Comey unprecedented? Hmmm…almost. This is only the second time a sitting U.S. President has fired the director of the FBI, an appointment that is supposed to last ten years in order that the head be presumed to work independently of the White House…something James Comey himself sort of shit all over this election…but I digress…in 1993 Slick Willy Clinton fired William Sessions after he refused to step down over ethical concerns. And what were those concerns? Apparently Sessions (such a common name connected to villainy if ever I’ve heard one) was running a scam to avoid paying his taxes, amongst other things, including taking a limo to and from work and billing the government after he built a fence around his home. Seems reasonable….DOUCHE fired Comey because…wait for it…wait for it…Hillary Clinton’s emails.

If anything DOUCHE’s firing of James Comey has parallels to Richard Nixon’s demanding the firing of Archibald Cox, and independent special prosecutor, who has subpoenaed the president asking for tapes of conversations in the White House in regards to the Watergate investigation. You can read more about all the fun that caused right here.

that said…DOUCHE did write to James Comey that the firing had nothing to do with Comey assuring DOUCHE three times that he was not under investigation, but more from the fact that after the third reassurance DOUCHE was upset that Beetlejuice did not appear. 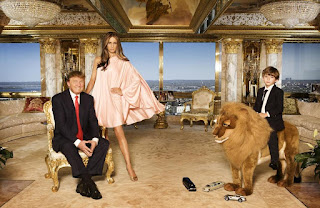 As if more bad news this week were possible…on Thursday DOUCHE MOTHERFUCKER signed an executive order creating a commission to investigate voter fraud in an election that he WON. While he commission is to be run by Mike “POTUS 46 in waiting” Pence, the commission’s co-chair, Kris Kobach, is of bigger concern here….as if anything is worth being more concerned about these days. For the uninitiated: Kris Kobach is the Kansas Secretary of State. He’s an advocate of strict, beyond strict really, voter laws. Kobach was basically the driving force behind those strict voter laws in Kansas that required new voters to provide a passport, birth certificate or naturalization papers when voting as proof of citizenship…something that he’d LOVE to take to the federal level and make law. Kobach’s name was one of those floated about for the head of the Department of Homeland Security job…my guess is that DOUCHE was simply waiting to give him a much more nefarious role and finally found it in this taxpayer wasting, Russian scandal averting smoke and mirrors commission.

Turning back to France’s election…a little tidbit that you may already know. France had their lowest voter turnout at 74% of the population…that’s the lowest it’s been since 1969, a year after the tumultuous riots in Paris. If 74% of the people voted in the United States in 2016 it would’ve been the HIGHEST voter turnout since 1896 when William McKinley defeated William Jennings Bryan…on that note, if I haven’t enough, I’d like to once again thank those of you who voted for DOUCHE for this mess, especially you fucking assholes in Wisconsin, Michigan, and my home RED state of Pennsylvania. I’d like to thank you dipshit, ignorant, self-involved motherfuckers who looked at both Hillary Clinton and Donald Trump, said they were basically the same (really, fuckfaces?) and chose to vote for a third party shithead….but most importantly I’d like to extend a thank you to all of you lazy snowflakes who chose to shrug and stay home on election day…hope you’re enjoying the end of your democracy.

I’ve been reading tons of articles this week saying with DOUCHE firing Comey were are looking at a despot consolidation his authoritarian power, and tons of articles basically saying that this is the beginning of the end of the DOUCHE era….i tend to side with the former. DOUCHE is basically paint-by-the-numbers autocrat in the making with nobody in any position of power to stop him or call him on his threats. He’s proven his guilt beyond a doubt and has violated the constitution so many time I’m surprised there isn’t a harassment lawsuit filed against him…the point is…no one cares. The GOP?  Man, they’re too far gone…they’ve been beholden to corporate interests for so long that none of this matters. The democrats simply don’t have the power to do anything. People keep talking about mid-term elections in 2018…but how fucking far gone will this nation be by then? Can we really sustain another 20 months of this?

I’ll be honest…this week put me right back to the days after the election where I pretty much feel hopeless. I’m not shocked and surprised by anything that DOUCHE has done…I expected it. I suppose that I’m getting worn out already of living under this asshole…which isn’t fair. If you look at the history of the United States basically women and minorities having been living under “democratic” government such as this since 1776….so this is me in a moment of weakness here.

I gotta dust off folks…we all do…we knew this was going to be a motherfucker of a fight…so let’s fight…DOUCHE has the power but he doesn’t really own shit. Keep making art, keep protesting, keep ahold of yourself and that in which you value…We the People…we need to make that mean something….when it comes down to it….we need to make all of those milquetoasts in Washington piss their pants when they think of the general population….so keep pushing us DOUCHE…but remember…you’ve been warned, motherfucker.

Stick around because at 10:30 we got the poetry of Joe Cottonwood and Tomorrow at the same time we have the poetry of Donna Hilbert….and remember to SUBMIT2RESIST right here at winedrunksidewalk@gmail.com
Posted by John Grochalski at 10:00 AM