Welcome to week seventeen folks...where the "witch hunt" is in full bloom!

If we can, for a moment, we’re going to use the good ol’ WineDrunk SideWalk time machine and take us back to last week before I comment, rant about the new horrors shaping the decline of the United States Empire this week. In all of the James Comey hoopla I forgot to comment on the fact that Jefferson Beauregard Sessions, our Attorney General, is bringing back the WAR on Drugs. Yes, the DOUCHE MOTHERFUCKER regime, having not yet selected a new country for the USA to go to war with, has decided to continue its assault on its own citizens by bringing back a tougher version of the archaic, demoralizing failure of an incarceration policy. Sessions has given a directive to federal prosecutors (who already have too much power and influence in the justice system) to simply do away with the Obama-era Smart on Crime initiative. What this means is a full on return to the failed drug policies of the 1970s and 1980s which saw prison populations spike astronomically and harsher, more long-term sentences handed down for drug offenses. Sessions chose to do this at a time when even congressional consensus is that draconian policies such as these simply DO NOT WORK…but Jefferson Beauregard Sessions being the racist prick that he is, is forging ahead with his plan that will mostly affect communities of people of color….but who knows? Maybe Jeffy will have the cops at college campuses and in the burbs arresting Toby and Brad for selling pot to their friends too…fucking doubt it. DOUCHE MOTHERFUCKER is a moron but he’s a political neophyte….Jeffy has been in politics for decades…he know exactly what he’s doing and he knows exactly whom it is that he is setting out to hurt.

…and how about this for a segue: 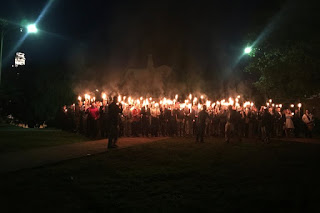 heartwarming isn’t it? no, this isn’t a candlelight vigil being held…for whatever it is people hold candlelight vigils…no, those are torches…torches being held by a pack of sensitive little, white supremacy snowflakes lead by Richard Spencer (last seen getting his ass handed to him on inauguration day) last Saturday night under the statue of the venerable symbol of racism and hatred, Robert E. Lee, in Charlottesville, Virginia, of all places. These neo-KKK rallies and protests have been popping up in places in the South (primarily New Orleans) as city and town mayors have begun taking down statues of the likes of Lee as well as Stonewall Jackson and Jefferson Davis, and renaming parks previously given a moniker associated with someone from the confederacy. Seems that Mr. Spencer and his ill-bred cohorts have a problem with this washing away of history, and these torch-light rallies are a part of their last grasp attempt to hold onto elements of their sick and violent history of aggression….i say so long Robert E. Lee Park…howdy, John Lewis Playground.

Another day…another step toward impeachment (I kid…I just wanted to make Mitch McConnell laugh…provided he’s reading). But apparently firing an FBI director wasn’t enough for DOUCHE….no reports have it that DOUCHE shared classified information in regards to ISIS last week with Russian foreign minister and ambassador, Sergey V. Lavrov. From what I’ve read the information was disclosed to the U.S. was so sensitive that it hadn’t even been much discussed in U.S. government circles let alone amongst our allies.... and of course said double-crossed ally had to be…wait for it…wait for it…Israel! The BFF of allies. The ace ally. The “my word is as solid as oak ally. The we’ll-look-the-other-way-while-you-keep-building-those-illegal-settlements ally. The let’s get together and do each other’s hair while we unnecessarily continue to vilify Iran to the world…ALLY.

The President, god help us all, can declassify information as he/she (one day…one day) sees fit, but, as with everything else in DOUCHE’S administration, this is highly irregular….personally I can’t tell if this was just general stupidity on DOUCHE’s part…or if this continues to be a part of the quid pro quo for helping to hand him the election…I guess we’ll see…I mean we will…the GOP will continue to keep playing a solid game of see no evil, hear no evil.

The DOUCHE MOTHERFUCKER shitpile keeps getting thicker and stinkier folks on Tuesday evening word got out that DOUCHE personally asked former FBI director James Comey to end the inquiry into Michael Flynn’s involvement with Russia. Apparently Comey documented this in a memo in February….and not like a post-it note or chicken scratch grocery lists, around Washington they take FBI director memos pretty fucking seriously….this is shaping up to be obstruction of justice 101 here...and Comey is proving to be the wrong gal to jilt! All the same it's another hour/Another scandal and the democrats are outraged in that we-don’t-have-any-actual-power way and Republicans are shrugging and asking for more evidence because, let’s face it, those swine gave up governance long before DOUCHE MOTHERFUCKER rolled into town in his golden, Russian subsidized limo, and, honestly, El DOUCHERINO could probably come flying onto Capitol Hill naked on a Putin’ Penis shaped missile with Kim Jong Un and Recep Erdogan taking turns sucking off the tip, and the GOP would still be hard pressed to find anything untoward and actually do their jobs….unless the Koch Brothers decide that it’s time to act like big boys and girls and govern.

Seemingly impervious, or simply clueless, to the shit-storm brewing around him, DOUCHE MOTHERFUCKER has been making the commencement speech rounds in recent days, first visiting the next generation of promise keepers or keeper promises or whatever they call themselves at bullshit shit Liberty College, and more tellingly on Wednesday giving a commencement speech at the Coast Guard Academy. As with everything DOUCHE does the speech to the coast guard kids was more about himself than having anything to do with the graduates or, as in presidential commencement speeches of the past, anything to do with his agenda (does DOUCHE even have an agenda other than outright idiocy and incompetence at this point?). No, DOUCHE used the speech to bitch about his treatment by the media saying: “Look at the way I’ve been treated, especially by the media. No politician in history—and I say this with great surety—has been treated worse or more unfairly.” Former presidents Lincoln, Garfield, McKinley and Kennedy responded by turning over in their graves...or let's not even go that route....let's just ask President Obama how badly and how much
bullshit he put up with coming from Republican fucktards for the last eight years....go home DOUCHE...do yourself a favor and resign now.

and finally four months (and seemingly ten years) into this farce of an administration, the justice department on Wednesday FINALFUCKINGLY appointed former FBI director Robert S. Mueller III as special counsel into the investigation of ties between the DOUCHE campaign and Russian officials. The decision was made by soon-to-be former deputy attorney general Rod J. Rosenstein after a week in which anyone with half a brain (excluding Paul "keep it in the family" Ryan and Bitch McConnell) could see how much damage this administration was causing to the actual fiber of American life. Because I’m tired and hungover and this fucking dickwad's presidential term has basically taking over my writing mornings you can read for yourself about the duties of the special counsel right HERE.


On top of all these domestic messes…DOUCHE leaves Friday for a trip to play golf in not only Saudi Arabia, but also Israel (awkwaaaaard), Italy and Belgium…while I’m glad to see is flabby, orange ass out of the U.S. for a bit… to star in the American version of An Idiot Abroad, let’s hope he leaves behind Betty Ross’ award winning apple pie recipe….can’t let that get into Saudi hands…not for anything.... on a personal note, DOUCHE, I hope you have so much turbulence to and from that you puke up every blood red cheeseburger you manage to shove down your fat, orange throat.
you know it's all well and good that DOUCHE MOTHERFUCKER could be impeached...or he could
resign...or he could resign while being impeached...or resign after...or spin himself into such a tizzy that he barrels through the earth and melts at its core....we just don't know....but should DOUCHE MOTHERFUCKER be removed from office, while I'll feel that momentary sense of relief deep down I know that we'll be faced with this: 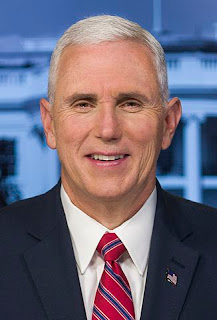 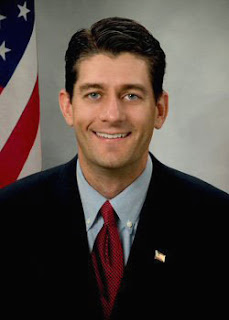 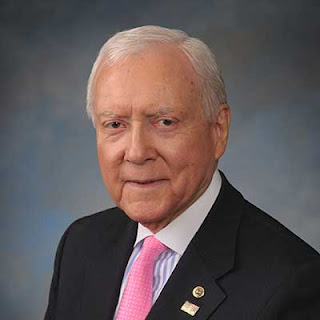 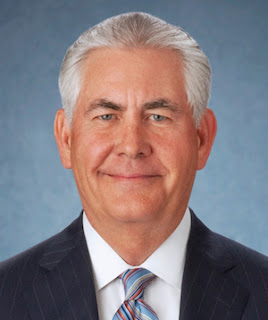