Hey and ho…and welcome to week TWENTY THREE…where any victory for DOUCHE MOTHERFUCKER (even a half-assed one) is a defeat for democracy.

first and foremost, Ally Malinenko with a rundown of this year's NYC Pride Parade:

Knock knock. Hello, kittens. It's Ally again. I'm just sneaking in here for a second to talk about some things that went down at this years PRIDE parade. I'll keep it short I promise.
First off there were way too many politicians and corporations shilling for queer dollars but whatever. That's been the case for awhile now. More importantly, THIS bastard had the gross ass nerve to show up. 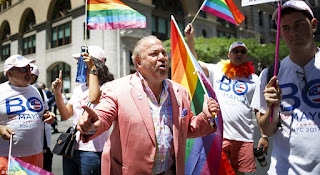 If you don't know who that is it's Bo Dietl.
Bo is a scumbag. Bo is an ex-cop turned "private investigator" that works for Fox News and defends trash people like Roger Ailes by threatening the women who spoke out about his trash ass harassing them. He's a thug. Bo also wants to be mayor of my city. I get that a lot of people don't like Bill but this cannot stand. I've already got a populist bastard in the White House. I don't need one in Gracie Mansion. So fellow New Yorkers, you need to march your little asses to the voting booth this year and VOTE.

So while I'm standing there watching the parade and I see this bastard come around the corner carrying our damn flag I nearly fell over. I started calling him names and three young women next to me got their hackles up. I had to school them in the douchebaggery that is Bo. I told them to go read the New York Times article. I pressured them to bring it up on their little devices and read it now. They did not. But they did give him some boos and a thumbs down as he passed. So small victory?

Anyway, again, fellow New Yorkers please vote. We cannot abide Bo. We are a sanctuary city and we must stay that way.

That's all! Adios, kittens. Remember....chins up. Claws OUT.

So…let’s start with our increasingly conservative and less impartial Supreme Court…under the guise of reviewing the scope of presidential power, the Supreme Court and/or SCOTUS as millennials and lazy human beings call them,  agreed to hear DOUCHE’s Muslim Ban (travel ban my ass) case by October contingent upon the asshole’s administration doing the actual work of taking a look at United States vetting process for foreigners, which was the, excuse the pun, trumped up “reason” for DOUCHE’s Muslim Ban in the first place aside from his overt racism and xenophobia. In hearing the case the Supreme Court will allow a very narrow portion of DOUCHE’s ban to remain, which pretty much means not allowing people who have no vested interest in the United States (business, family, education) and whom have never been to the United States (are there people who seriously still want to come here with that simp in charge?) until said “vetting” research is done.  I’m willing to bet DOUCHE doesn’t have a page of vetting research done by October…unless he squirrels away his kid’s crayons.  But…you know…justice at last for our beleaguered “leader.”

Because not only are the GOP a party of racist, misogynistic, idiotic corporate shills who lick dogshit of Koch Brothers boots….they also….can’t lead. That’s right, Mitch “Kentucky Neck” McConnell came out on Tuesday and admitted that the GOP’s draconian and pure evil health care” bill will have to wait under AFTER White, Wealthy Landowner Independence Day (July 4th) to be put up for a vote because….basically they don’t have the votes within their own party….excuse me a moment HA HA HA HA HA HA HA HA HA!!!!!!!!!  Ehem….in refusing to consider the bill several GOP senators admitted to their hearts growing three sizes in one day…except Ted Cruz….Ted's just mad that only 22 million people will be denied health care under the GOP plan...that's not nearly enough possible dead people so that Ted can walk from D.C. to the West Coast on the backs of the carcasses of working class people making a combined income of under 35K a year….Good old Ted Cruz...now there's one man whom i know can’t wait for the swine fucking contest on July 4th.


The sad truth of the matter is that TrumpCare isn’t going anywhere. The GOP are like cockroaches after a hurricane…they’ll be back…and so will their diabolical scheme. Chances are good that eventually the two or three functioning noodles they have will come up with a plan that’ll ease the few remaining moderates minds, while making any and every concession they can to their fascist colleagues on the far right. We know that whatever and whenever they DO come up with a health care “plan” that it will ultimately hurt the poor, women and people of color. Whatever the GOP does it will protect those all-important white middle class and wealthy voters. Look, I’m white. I grew up relatively middle class. I’ve known wealthy white people. Middle class and wealthy white people could have a thousand dollars in their pocket but they’d just as soon take the last doughnut from the box and shove it down their pasty faces rather than buying a new one and letting someone less fortunate then themselves have it.

And where do the Democrats fit into all of this, provided they’d ever like to be in power again? The talk is mostly that they need to start appealing to the Trumpian members of the population…and maybe that’s so…but maybe taking a conservative mindset isn’t the right choice. Instead of putting identity politics and such aside, maybe take a cue from a senile septuagenarian like Bernie Sanders, and push the party a touch to the left. I’m not suggesting go full snake oil salesman like Sanders did…but maybe the time is ripe to start thinking about Single-payer health care systems…even if it isn’t 100% plausible…what have the Democrats got to lose? If Sanders and DOUCHE were able to sell lies and foolish conjecture, why not Democrats? Christ, if the 2016 election proved anything it’s that American populace prefers pretty lies and promises over actual policy.


According to the Pentagon, there has been chemical weapon activity in Syria and another chemical attack by the Bashar al-Assad regime…on his own fucking people. See…now here’s the problem for me….how reliable IS the defense department in the DOUCHE era? I mean is this a legitimate threat, or is this the working of underlings who are sick of watching DOUCHE walk around the WH with a hard-on, screaming….i wanna drop more bombs! I wanna drop more bombs! Once you get a taste of civilian blood you never go back….and DOUCHE has at least 500 civilian casualties under his belt.

Speaking of douchebags….more than 120 potential jurors (I’ve read over 130 at this point) had to be dismissed from the fraud trail of Martin Shkreli….because they HATE him….keep in mind this the jackass who raised the price of a drug from $13.50 to $750 in ONE YEAR…of course people hate this guy…I mean look at that face: 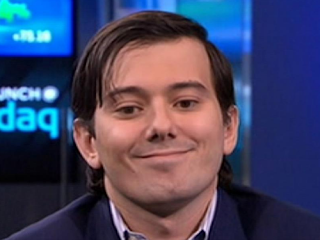 He has DOUCHE BAG face. You all know douche bag face, right? Think of the son of one of your friends…not that one…the one who smirks and has a gelled faux-hawk. Or think of classic 1980s movie baddies like Biff Tannen…or pretty much anything William Zabka did from Karate Kid up to Back to School. DOUCHE BAG FACE!!!! And a major, major lesson in having douchebag face is….don’t be a douchebag. Be a vet.  Be a community helper. Work at soup kitchen for Christ sake…but don’t bilk people $700 dollar a pill on a much needed drug used by AIDS and transplant patients!

Wow....anyone seen that NRA video?  Looks like the GOP has someone in competition with them for America's premier Domestic Terrorist Organization. Scary stuff....if you've never dealt with the NRA before....i mean c'mon Wayne LaPierre most likely gets a hard-on every time there's gun violence in America...violence is that Prick's Viagra.


On Thursday while DOUCHE tweeted attacks against another woman for bleeding from somewhere (this time her face) the State Department issued its Guidelines for the revised travel ban that the worthless and anemic Supreme Court of the United States let stand, in part, while they waited to take up the case in October, provided the United States of America is still a functioning, governing body of citizen….so who’s in and who’s out.  Well….any step siblings or any half siblings that you have….welcome to America! Sons and Daughters in law….Bienvenido!
Parents and In-Laws….Ahlaan Bik!  But brothers and sisters in law and grandma…get the FUCK OUT!  The guidelines for people who share only “bona fide relationships” again…take a hike grandma….went into effect on Thursday at 8pm. Just a reminder…the travel bans effects the countries: Iran, Libya, Somalia, Sudan, Syria and Yemen…but not such kind and open-minded places such as Saudi Arabia where 15 of the 19 9/11 attackers were from…Oil talks, folks…diplomacy and rational thought walk a marathon.


Touching back on the DOUCHE/Morning Joe/Mika Brzezinski latest round of Reality TV presidency insanity…I didn’t mean to make light of it above. DOUCHE’s history of his treatment of women from verbal attacks, to name calling, to sexual assault all the way to raping his first wife, is absolutely nothing to make light of.  What gets me is the false scolding by republicans that is going on….i mean get fucked GOP…you goddamned enablers! If you were really concerned about this manchild’s behavior, your party’s ID, to be exact, you’d handle him. Your party machine is bigger than any one orange-colored, racist, sexist, rapist, misogynist…so cut it w/the hypocrisy. You chose to lie down with this monster, allowed him to pass executive orders and pick a Supreme Court justice...any of Trump's bloodshed is on your hands as well. You all might as well be standing behind him when he tweets...now shut the fuck up and wait for you comeuppance in 2018, cocksuckers.

and....so another week in crazytown ends with a disgruntled doctor killing 1 and wounded 6 others before setting himself on fire and shooting himself in the head at a hospital in The Bronx.....

Alan Catlin is kicking us off today at 10:30 and Matthew Sradeja will be handling the job tomorrow.