So long Mooch we hardly knew you....that's right folks, lasting a mere ten days as WH communications director, Anthony Scaramucci, was unceremoniously fired from his position by new WH chief of staff, John C. Kelly, the current wearer of the WH big boy pants. During his brief tenure The Mooch's puny mutt, short-guy syndrome, NYC loud-mouth, sycophant style pushed an already beleaguered WH into further chaos, causing both a press secretary and chief of staff to resign their positions (was it only last week? yes, yes it was). Sources say the hiring and firing of The Mooch (i'm sorry i don't usually take the shortcut with these things but i'm honestly so fucking sick of all of these people i don't have the mental energy to continuously spell  this asshole's name) was all at the behest of Trophy Daughter #1 and her husband SecurityRisk-in-Law.....well....what a couple of Verruca Salt's those two shitheads are. Daddy I want a new press secretary! Daddy I want a new communications director! Daddy I want it now!

What a shit-show....even DOUCHE himself said that The Mooch's language was not appropriate for the WH...not appropriate?  Coming from a rapist, sexist, racist, misogynistic, xenophobe whose chief strategist is a fucking NEO-NAZI I'd say The Mooch's idiot bombast is right in line with this White House.

But all of that is changing under John C. Kelly, right? The brutal former Homeland Security director who wants to impose a "military discipline" on a unruly WH full of a bunch of dudes with penis envy....minus Kellyanne and Trophy Daughter #1, of course. While I'm not big on ex-military dudes running anything but McDonald's and Subway franchises, I, for one, say good luck General Kelly. If the twilight of your career means reigning in the Twitter account of a 71-year old man-child with a penchant to grab 'em by the pussy....well...you're a better man than me...actually you aren't, fucktard.

Speaking of man-child. Russia and the United States are continuing their game of who can be the biggest tough guy on the block. First the United States passes sanctions on Russia, and now Russia retaliates by ordering the U.S. diplomatic mission (whatever the fuck that is) must remove 755 of its employees..of course this reduction doesn't take place until after September 1, giving DOUCHE MOTHERFUCKER plenty of time to call his boyfriend and try and patch things up...all the same, being a cold war kid, it's still dizzying to me to watch these two asshole nations play at being the bully. They don't even do it well. Vile and devious both the U.S. and Russia are, they act like it's the biggest shock in the world when someone challenges them. You sanction me? Well, it's time to play toy soldiers on the boarder of Belaurus....fucking dipshits. Imagine, if you will, a world without the United States and Russia.....sounds nice....and if those congressional sanctions didn't continuously fuck Iran I'd be all for the signing...Anything to constipate Putin.

How about this BULLSHIT? I mean what to even say, especially to you folks who almost felt sorry for Jeffy the Racist when DOUCHE was going nuts on him. I swear stop pretending, dickhead. Not that we need it but Jeffy might as well just walk around in his Klan robes...if nothing else Kris Kobach might find it kinky....and not for nothing, DOUCHE himself is an affirmative action baby...you think that dumb motherfucker got into ANY of his prep schools based on his grades....Nah, it was his racist, Nazi old man's money that got little bitch Donny into those schools.

First week in August, right? Let's check the DOUCHE MOTHERFUCKER checklist, shall we? Supreme Court backed ban on Muslims? CHECK. Screwing with women's rights? CHECK. Fucking with the LGBTQIA community? CHECK. Rounding up Latino people? CHECK. Continuing the United States founding doctrine of disenfranchising black people? CHECK...no wonder this nazi has the approval of over 80% of Republicans....Trump is a GOP constituent come shot.

at least this man exists.... 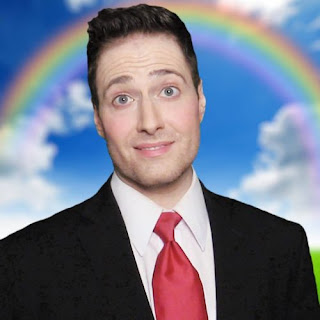 Randy Rainbow might be the only person who has made me actually laugh at ANYTHING related to the DOUCHE administration....you can check him out HERE.

Sorry for the Randy Rainbow break....but it gets so tiring writing about these fucking assholes sometimes....and this is mostly to take the piss out of all of this.  I commend real journalists and reporters that have to write stories on these cocksuckers every single day.

Shall we continue?  But with what? It being found out that DOUCHE MOTHERFUCKER actually dictated the comments that DOUCHE Jr. made in regards to his meeting with the Russians? Or how DOUCHE lied about phone calls from the Boy Scouts, from the president of Mexico complimenting his wall?  Or how about this fucked up RAISE Act that will eliminate 50,000 visas in what we call the Diverse Lottery Visas. Or how it would reduce the number of refugees into the United States to 50,000. Or how it would get rid of the ability of immigrants to sponsor members of their own families. Or how it would change the structure of immigration to a merit-based, skills-based point system. Or maybe Jeffy the Racists little tirade on Friday in regards to all of the leaks coming out of the WH and essentially threatening to prosecute journalists....fucking Nazis pissing on the Statue of Liberty is what Trump and Bannon and John C. Kelly and whatever THING this Stephen Miller is....the whole crooked lot of them.

Honestly......shit....look, there may not be a week TWENTY NINE wrap-up....not because these fucking piss-ants have gotten to me...I did all of my Trump worrying from June 2015-November 2016. None of this shit actually surprises me....it's just tiring.  Again, I don't know how journalists cover this collection of assholes for real....all i know is I'm tired. I fucking hate Trump. I hate good segment of the population in a way that will probably never change....hell, i don't even want to go back to my home state of Pennsylvania because it went red.  It's scary enough driving through rural PA without seeing DOUCHE MOTHERFUCKER signs everywhere.

P.S. Trump....Oh...and you didn't do shit to boost the economy either, you orange-motherfucker....all thanks to PRESIDENT OBAMA.