RIP Heather Heyer.....we could use more people out there like you, people who understand the true meaning of the American dream, which is to fight for truth, for justice, for equality for all.

RIP Lt. H. Jay Cullen and Trooper Burke M.M. for dying in the line of service protecting the law of the land.

Three people....three fucking people....who had lives and loves and interests died during the protest and anti-protests in Charlottesville on Saturday, in what was supposed to be the biggest Nazi rally in the United States in over a decade, but was eventually called off due to amount of violence that surrounded the event.

and how did our forever lying leader of the so-called free world DOUCHE MOTHERFUCKER respond to the event in Charlottesville?

Well....initially he blamed bad people on "both sides" as if there is another side when dealing with Nazis....but this is a quote from Bannon's lapdog after all

but THEN on Monday, after two day of anger and protests against DOUCHE's comments, he came out and blamed the violence in Charlottesville on  "Alt-right and Neo-Nazi" groups.

but, wait, hold on....THEN on Tuesday, good ol' DOUCHE backtracked once again and blamed the violence on people on the right and the so-called Alt-Left.....Alt-Left? I didn't even know we had such a thing as an Alt-Left in such a backward thinking cluster fuck of stolen land such as the United States of America. Do we even have an ACTUAL left? Alt-Left? Why that must be like seeing a unicorn in these parts.....but DOUCHE MOTHERFUCKER has seen them...oh, he's seen their evil ways.

America the reality show, man.....week TWENTY NINE gave us Nuclear War talk with the North Koreans and a Nazi Rally, and this week has all but given us DOUCHE MOTHERFUCKER basically admitting that he's a racist, Nazi sympathizer who just LOVES those confederate statues. John Kelly might be hanging his head in shame, but how much you wanna bet good old DOUCHE and Steve Bannon are trying on some sweet vintage SS uniforms right now in the Oval Office, and wondering how to zip them up while holding onto good old fashioned white nationalist hard-ons? Of course Trump does have a baby-dick, so....

The sad thing, at least for someone like myself, is that I'm neither shocked nor surprised by this public display of basically legitimizing Nazi groups in America by the Commander-in-Chief. Everything this pea-brained white supremacist has done since January I've all but expected...I, like many many others, saw this coming. For those of you who thought that I was nuts from June 2015 to November 2016, no apologies necessary; the proof is in the tasting of the pudding. For those of you who thought Donald Trump and Hillary Clinton were one-in-the-same and either didn't vote or voted third party....FUCK YOU. For those of you who voted for Trump....we're enemies...there's no reconciliation here...EVER. You sold out your country to a vile sexist, racist, rapist con man. For what? To continue profiting on the stock market? Because you lost your coal job, your manufacturing job, and you thought a reality tv star with a history of abuse and nefarious activities was going to somehow give you your job back? Because you fail to realize that for hundreds of years the white, patriarchal system of law in the United States of America has worked over-time, OVER FUCKING TIME, to benefit you and only you, white boy, and to pit your lilly white ass against black people and women and other POC, people you should be aligning yourself with AGAINST crooked motherfuckers like the current president of the United States.

DOUCHE did bring up one interesting thing in his latest tirade against the Nazis or the magical Alt-left or whatever he rails against next (BTW....has anyone seen Paul Ryan or is he still hiding under his desk until 2018?)...DOUCHE took us back to the reason these Nazis congregated in Charlottesville in the first place...a statue....a fucking statue of Robert E. Lee, which is going to be removed because....well...Robert E. Lee was a cruel racist who fought as a general in the Civil War and if he had it his way in 2017 the United States would still be a slave-holding society...i mean what's not to love there?

But in making his argument against these evil Alt-Leftists, DOUCHE MOTHERFUCKER invoked the names of two of our founding fathers, George Washington and Thomas Jefferson. You see in DOUCHE'S white supremacist world view taking down statues to people like Robert E. Lee is people changing history, as opposed to learning from the sins of the past. What will happen, in a crooked world view like the one DOUCHE has, is that this raging band of Alt-Leftists won't be satisfied with statues of Lee or Jefferson Davis or Stonewall Jackson coming down...no, those vile unicorns won't rest until statues of George Washington come down, until the Washington Monument is renamed the Verizon Point, until Mt. Vernon is made into a gas station, until the statues of Thomas Jefferson come down, until he's removed from the two dollar bill and replaced with some slave woman from 300 years ago, and Jefferson's precious Monticello is made into a artisan ice cream shop that sells pumpkin ale flavored milkshakes (insert Steinbeck reference here).

Any thinking person knows this isn't going to happen...but it should. George Washington held over 317 slaves at the time of his death. He first OWNED another person at the age of 11...here George instead of a smartphone you get to own a family ripped from their home and culture in a country across the ocean...christ. Washington may or may not have treated his slaves harshly (smart money is on he did), slaves tried to run away from Mt. Vernon. I'm not making this shit up....here's a LINK to the actual slave FAQ for his fucking house. And, yes, it is known that Washington "struggled" with the idea of freeing the slaves, but thought better of it when it finally came down to trying to bind the states together in an effort to break away from England....i read a 900 page bio on the man....the "struggle" took up maybe two sentences.

As for Thomas Jefferson....he not only owned slaves....he raped them.

No matter what....the take away here this week? Your president is an asshole...and an open fucking racist.

but at least this happened to good old Jefferson Davis: 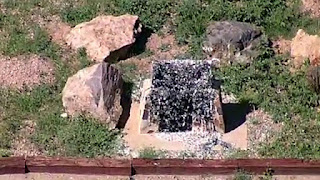 And while we here in America were dealing with domestic terrorists (i.e. racist white dudes) and the domestic terrorist who runs the country.....Spain had it's worst terrorist attack in over a decade on Thursday, when a van plowed into one of Barcelona's most popular areas, killing 15 people and injuring at least 80 others....thankfully police thwarted another attempted attack.  Of course the Islamic State took responsibility because like all good hate groups, be it the Islamic State, Nazis, White Nationalists, the Donald Trump administration, the Republican Party....they revel in the misery and pain they inflict upon innocent people. This is actually a developing story and today's NY Times has a couple of good article on it HERE and HERE

ugh....I suppose it's time to talk about the big, fat, pasty, meth-addicted elephant in the room, huh? On Friday Stephen K. Bannon resigned as DOUCHE MOTHERFUCKER's Chief Strategist after weeks of speculation that the Nazi would do so because he'd become more isolated in the WH and felt that he could better spread his message of hate, racism and division by rejoining the moron racists at Breitbart....which is EXACTLY what Bannon did.

Personally....I feel a little bit anti-climatic about it. Don't get me wrong...I did what every other sane, reasonable and 1/2 decent person did when they found out that Bannon was ousted....i went right onto that vile, insipid, juvenile platform, Twitter, and made fun of Bannon like i was partying down....but now.....i don't know. On the one hand, yeah, it's nice not to have his influence over DOUCHE in the WH...but let's not forget that Donny John was a birther and a racist long before Stephen K. Bannon rode into town under his whit sheets. Also....Bannon could cause a lot of damage on the outside. Unlike DOUCHE, Stevey-boy is actually principled in his sick beliefs. Trump may be a clown but what about four or eight years down the line when these Alt-Right jack-offs package their message into someone serious, someone whose NOT a reality tv, glorified slum lord clown...What then?

We fight....and we keep fighting....especially you asshole white people out there...get in the game, shitheads.

Anyway....another long week. I"m personally gonna go and take a dump on a photo of George Washington...but you folks stick around......at 10:30 we have your truly, seeing if i can replicate the "success" of my poem post from last week....and tomorrow we have Ally Malinenko at the same Bat-time/Bat-channel 10:30

a special thank you to all you writers and artists who've contributed to this project thus far. We were hurting there for a while but so many of you stepped up that we've managed to keep this going for 30 weeks of this Nazi.....and we've got the ammo to keep it going for a lot long as of right now.


Posted by John Grochalski at 9:45 AM