One of the hard things about writing this weekly post about the DOUCHE administration is that so many things just keep on happening. I post this on Saturdays at 10 A.M. EST, thinking, okay, it’s the weekend, DOUCHE is down in Florida at his Rama-Lama-Ding-Dong resort…nothing else should be happening until he farts his way back to Washington D.C. (on the taxpayers dime…I mean EVERY fucking weekend….we’re essentially paying for this asshole to play GOLF…and I fucking HATE golf)..but with this administration this is simply not the case.

Saturday morning…woke up to DOUCHE and his little ladybody, Jeffy Sessions, asking for the resignation of the remaining 46 U.S. attorneys to have served under President Obama…while this isn’t unusual in regards to administration transitions, doing things like this in bulk, ala a firing squad, sends a sort of authoritarian message…and maybe just a touch of paranoia.

HEY KIDS! BE CAREFUL AROUND THOSE MICROWAVES….they could be spy cameras.

That’s right…the DOUCHE administration let Kellyanne Conway off the leash again and she’s out there spouting her crazy. On Sunday Crazypants Conway said that President Obama could’ve used any number of devices to spy on the MENSA meetings going on at the Dark Tower….including using a microwave as a spy camera and a wiretap. She’s getting the Jim Halpert for that one… 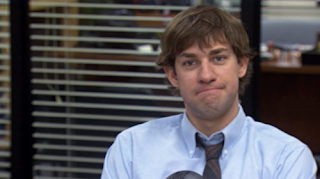 …of course Kellyanne has since backed off from this statement saying she was speaking more in a broad manner and that she wasn’t just speaking about microwaves, but also coffee pots, tea cups, saucers etc….obviously SOMEONE is excited for the new Beauty and the Beast movie. All the same…I’m finding somewhere else to heat up my daily morning breakfast burrito.

…and if Sean Spicer can use “wiretapping” in quotes then I can continue to use “president” in quotes when writing about/talking about/dreaming about DOUCHE.

According to the Congressional Budget Office…TRUMPCARE could add an estimated 24 million people to the list of uninsured by 2026 but SAVE an estimated 337 Billion dollars in the budget…which, let’s be honest, will probably go to some bullshit war.

A Nor’Easter in March????? Say it ain’t so Joe…wish I could but yours truly is writing this from the comfort of my home, on a work day, with the wind/snow/sleet/freezing rain outside doing it’s worst…but EPA Director Scott  “Captain Carbon” Pruitt says not to worry about a storm like this so late in the Winter…and he knows what he’s talking about.

In other news….if you’re a fan of the EPA better start stocking up on those T-shirts and coffee mugs now…DOUCHE’s budget proposal, aside from cuts to the State Department and Agriculture, calls for a 31% decrease in spending for the EPA (insert crying Native American commercial here)….but, hey, if you enjoy blowing shit up, the budget also calls for a HUUUUGGGEEEE increase in military spending. The budget also, sadly, seeks to eliminate the National Endowment for the Arts and the National Endowment for the Humanities, two organizations our art and knowledge hating GOPers have always been at odds with. Our Friends at the NY Times sum it up right HERE.

Honestly....anyone taking a look at DOUCHE's budget and is saying okay to this....
YOU HAVE NO SOUL.

Muslim Ban 2.0….DOA….FUCK YOU TRUMP. Of course DOUCHE tried to double down on the ban at one of his Neo-Nazi/Klan rallies in Tennessee by calling the block “political” and that he was going to bring back the original Muslim Ban….what a “tough” guy baby-dick is!

Russia’s favorite Attorney General Dzheff Sessions announced this week that it was time to get “tough” on crime and drug dealers in America…which is the GOP equivalent of saying, gee, we haven’t arrested enough Black and Latino dudes this year…..suburban white drug dealers named Todd and Chad rejoiced at the news….i give the DOUCHE administration until May before they start talking about Welfare Queens…or Dancing Queens…or however DOUCHE remembers it.

Brief observation that I stole from someone else….Trump is the President and Bill Cosby is a rapist…those of you out there STILL nostalgic for the 1980s….let me be the first to say FUCK YOU.