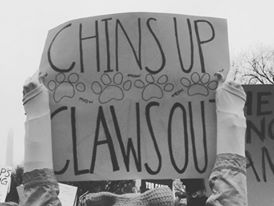 Welcome to a very special episode of WineDrunk SideWalk: Shipwrecked in Trumpland. This month we’ll be celebrating Women’s History Month, highlighting the brilliant work of creative women and women identifying artists out there as they continue to #Resist.

And just so we never forget what is it we're doing out here, kittens? That’s right. We’re smashing the patriarchy to smithereens. All day, every day.

Amazingly enough this week started with some good news! I know, right? SCOTUS rejected the administrations request to skip the appeals court process and review a district court judge’s ruling requiring the admin to resume renewals of protected status under the Deferred Action for Childhood Arrivals Program!

DACA protects more than 700,000 young immigrant AMERICANS. These dreamers are our future and we should never be allowed to forget that.
In the meantime DOUCHE himself is claiming that had he been there, he would have run into MSD high school in Parkland, Florida. Okay Jason Bourne. Sure you would have. Like we all haven’t watched that gif of you getting spooked by a bald eagle 1,000 times.

For reasons that continue to baffle me people are still interviewing Ivanka Trump (Lordt, I swear when this mess is over I will never not wake up feeling blessed that I do not have to hear that vapid excuse for a woman speak anymore). She doubled down on her rapist father and made it clear that she “believed her father.” Not that this is shocking or surprising just another white woman betraying her sisters. Par for the course since the 2016 election…..or you know…..forever.

But the universe it seems offers a small reward for our unwavering dislike of Ivanka Trump, because it seems her husband and all around scum bag Jared Kushner is CANCELLED.

Okay, kittens, he wasn’t cancelled. I’m getting too excited, aren’t I? But he was DOWNGRADED and you know what? I’ll take it. The memo which came from chief of staff John Kelly, bumped Kushner down from the highest level – Top Secret/SCI – to just Secret level.

Which is a good thing considering at least FOUR countries have privately discussed ways they could manipulate his lily white ass. This is exactly the kind of person a very stable genius would put in charge of state secrets.

And because we haven’t had an update on IT’S MUELLER TIME it is with good news that I tell you that everyone’s favorite Special Counsel has moved to drop 22 tax and bank fraud charges against Rick Gates because that boy is singing like the beautiful little canary he is.

Net neutrality is back in the news – Democrats have introduced legislation in both chambers of Congress to reverse this incredibly stupid and incredibly unpopular repeal. The bill has 50 supporters in the Senate, putting it just one vote shy to ensure passage but the House, as always, is another story. The story of an uphill battle in need of 218 votes with zero Republican support. Regardless we must stay vigilant about this, kittens. Unfettered access to the internet is our RIGHT.

On Wednesday Hope Hicks resigned. That’s right, kittens. After 8 hours of testifying and admitting she lies for Trump (but never about Russia oh heaven’s no) she’s gleefully packing her bags and getting the hell out of Dodge. As we wave goodbye let’s all remember that Ms. Hicks who seemed to have just gotten here actually served longer than most people and oddly enough had more clearance than Kelly cause why not? Ms. Hicks is just one of many on their way out the door as this ship sinks faster and faster. With her is Reed Cordish, one of Jared’s boys, Josh Raffel, yet another one of Jared’s boys and finally Dina Powell who is….

another one of Jared’s boys.

Speaking of Mueller’s investigation I think all of us will be happy to hear that he’s been focusing on connecting Trump to Russia prior to the 2016 campaign (YES!) as well as if he knew about the hacked Democratic emails before they were released (Another YES!). Meanwhile DOUCHE was going after Jeff Sessions about FISA, Jeff stammering like Foghorn Leghorn that he’s an honorable man. While that nonsense was happening, ICE swept through the Bay Area and arrested 150 people.

Didn’t think so. You know who is great though…. Ben Carson. That mofo managed to get $165,000 on LOUNGE FURNITURE for his office (while HUD took a 6.8 million dollar cut but that’s fine). I was real mad about this and then I saw this and felt better: 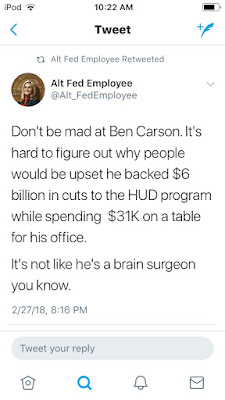 Then the WH said they were going to replace H. R. McMaster as National Security advisor as soon as next month. I don’t know about you, kittens, but I have never seen this rate of turnover in government before in my life. Also thus far McMaster has struck me as sane-ish so this is indeed disappointing. And to add more fun to the mix Putin has some weapons! Wheeeeee!

Speaking of Russia, Mueller is now investigating that time when DOUCHE wanted to fire Foghorn Leghorn to determine if it’s a larger aspect of obstruction of justice. Hm….he wanted to fire Sessions and put in someone “loyal.” I’d go with that being a big yes. And Mueller is also assembling charges against the Russians who carried out the hacking and leaking of the DNC’s emails.

This has continued to be a rough week on poor old Jared, as it was revealed that his family received 509 MILLION in loans shortly after White House meetings. Ethics officials all agree: “That’s fucked.”

Speaking of fucked, 57% of American’s think Trump is racist, 58% say they want a Congress that stands up to Trump, not works with him and 60% of those polled think he’s doing a shite job.

It's been a week kids and we're all tired. Take a moment to have some gratitude with yourself for all the resisting you did this week and then share some with our fellow kittens.

Next up we've got poems and images by Jennifer Lagier at 10:30.
and then Sunday it's poetry by Jennifer Eppinger.

Chins up, claws out, kittens. That's how we smash the patriarchy.