Hello kittens and welcome to week 62 and our final week of Women’s History Month.
Before we get started, I just want everyone to take a moment to acknowledge this: 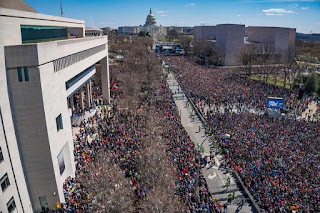 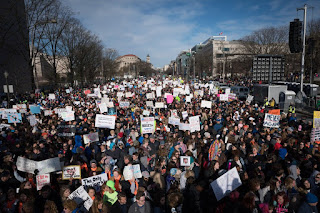 Here, here’s a better view.
These are the kids we were supposed to protect, out here, in the street begging for their government to do, something, anything to save their fucking lives.

And on Tuesday their voice was joined by John Paul Stevens who called for a repeal of the second amendment.

Look, we don’t need to repeal the second amendment. We just need to reverse Heller. Heller was a landmark case in which the Supreme Court held that the Second Ammendment protects an individual’s right to possess a firearm unconnected with service in a militia for traditional lawful purposes such as self-defense in the home. It also made it so that DC’s handgun ban that required shotguns and rifles to unloaded and disassembled or bound by a trigger lock was a violation of this ruling.

62% of Americans support tougher gun control laws.
Only 42% think the government is going to do jack shit about it.

Heller only happened in 2008. It’s not even ten years old. There are so many avenues for change here.

In the meantime, the week started out with the president*’s personal lawyer team being down to just one little monkey jumping on the bed. Right now Jay Sekulow is the ONLY lawyer dealing with Robert Mueller investigation.  All the others have high tailed it out of there. I would love to say that this is a positive sign but I’m not ready for optimism yet.

Stormy Daniels did her interview in which she revealed that she was threatened not to speak about the affair and after it aired the president*’s lawyer Michael Cohen sent a cease and desist letter.

A government watchdog group has accused Cambridge Analytica of violating federal election laws that prohibit foreign entities from participating in the US election process, directly or indirectly.  After that the Federal Trade Commission confirmed that it’s opened an investigation into the privacy practices of Facebook, tanking its shares.

On Tuesday we found out that the president* wants to include a question on the 2020 census asking about citizenship which is OBVIOULSY a terrible idea. Naturally people who are not citizens, are going to not answer which is going to lead to an inaccurate count which can then snowball into funding issues as well as possible redistricting. The census has not asked about citizenship in 70 years. Because of this move, the State of California (shout out to my west coast resisters!) is suing the Admin. And by the middle of the week California was joined by 12 more states!

In the meantime, the president* is suggesting that the US military could pay for his stupid racist border wall.  Speaking of stupid everybody’s favorite son in law, Kushner is in trouble again. This time two loans, totaling $500 million, are under investigation for violating federal ethics regulations

On Wednesday we learned that Rick Gates KNOWINGLY communicated with a former Russian Intelligence Officer during the 2016 campaign.  Gates spilled his tea to Alex van der Zwaan who then spilled it to Bob.  And now he’s prolly going to jail! Which is what we all hope happens to the president* isn’t it, kittens?

Meanwhile the orange menace was planning on pardoning Manafort and Flynn. Wonder why? Worried about more spilt tea, you motherfucker?

So while Rick is playing nice with Bob, Manafort (god I can’t wait till we don’t have to talk about these fucking white men anymore) is NOT because he’s expecting Trump to pardon him.
And it looks like pro-ASSHOLE news sites are circulating stories to discredit the investigation so that if (though now I fear when) he fires Mueller he’ll have lots of news coverage to justify it. He’s running another fucking campaign here.

Oh Stormy ain’t quitting, the EPA sent staffers a list of 8 approved talking points to downplay climate change even though 45% of Americans are legit worried about our planet going to shit, a former Disney child star (his thing for young blondes is gross) is now a press aide, and he’s replacing Shulkin with this motherfucking personal physician. 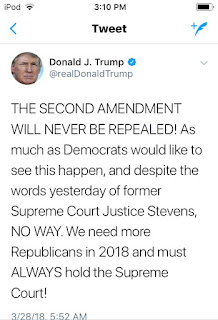 Cool.
Drinks are on me!

By weeks end, the president*’s outside advisors convinced him that he doesn’t need a chief of staff or a communications director, Mueller’s team was digging up dirt on Sessions meeting with Kislyak and the EPA Administrator Scott Pruit lived in a condo tied to energy lobbyists – while he’s rolling back federal rules to make cars cleaner, and David Shulkin said he was fired as the Secretary of Veteran Affairs because he was standing in the way of the orange menace trying to privatize the VA. The person filling his position has never run a large bureaucracy. And Ben Carson, our favorite fucking brain surgeon, is attempting to reverse federal efforts to enforce fair housing.

It’s like they’re not even trying to cover it up anymore. They give absolutely zero fucks and they want us to know it.

And yet 54% of American’s think he’s going to lose his campaign re-election.

The president* who can’t find the time to call his own people to let them know they’re fired did manage to find time to call Roseanne Barr on her high ratings for the revival of her show.

Lots of people have said it much more eloquently than I ever could so you should read them, (really it’s Roxane Gay, it’s gonna be good) but I will say, this reboot is bullshit. Normalizing this man is bullshit. And doing it the way the show is doing it – with token diverse characters - is even more bullshit. In case you need a reminder of what Rosanne is like now, here you go. It’s not for the faint-hearted. And yes, it’s real.

Wanna watch a show about the working class that is not steeped in white supremacy and this false narrative that only white people are working class? Watch Superstore.

Our week did end with, well, I wouldn’t call it good news, because there is too much tragedy surrounding it but for a change a proper verdict was handed down. Noor Salman, the widow of Omar Mateen, was found not guilty of helping her husband carry out the Pulse shooting. I think it’s important that we remember that she was a victim of his violence – both physically and mentally. He beat her. He raped her. He isolated her. He controlled her. This woman was literally put on trial for her husband’s crimes.

I want to tie this into this excellent piece that was written by Isabelle Robinson, one of the Parkland shooting survivors.  This #WalkUPNotOut ideology is dangerous. Children are not responsible for managing the mental health of their peers, in the same way the women are not responsible for men’s violence. The Isla Vista murder blamed women for not meeting his needs. The Maryland teenager who killed a woman who stopped dating him was described by the media as lovesick.  And now, Noor was put on trial to be the face of her husband’s crimes.

What everyone needs to understand is simple – IT IS NOT OUR FAULT IF MEN KILL US. 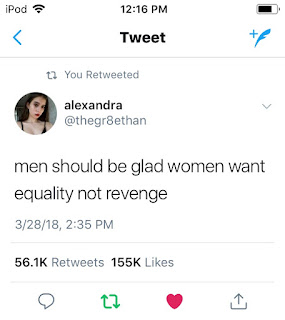 Before we call it a day, since this is the last week of Women’s History Month and my takeover of WinedrunkSidewalk I would like to say a few thank yous.

First off, thank you to John Grochalski who didn’t even blink when I told him I wanted to take over his blog for an entire month. Not only did he not blink, he was thrilled. He’s been running this thing singlehandedly since Day 1. We’re closing out Day 436 tomorrow. That is a long time to keep up an art resistance.

This blog is a protest. And it does not work without participants. So to all the women who submitted: I cannot thank you enough. You were fierce, you were honest, you were loving, you were real. You are all artists of the utmost caliber and I’m honored to have been a part of this with you.

As of writing this your combined art had a total of almost 5,000 hits!!! Thank you to all the women and men out there who shared this work and helped resist.

I’m so proud of all of you.

BUT ….we are not done. I’m asking everyone, all the women who we have submitted and all the women who have been reading along and wondering – I need  you to keep submitting. This is, as I said, a protest piece and protest we will. Keep sending us your work. Keep staring at this Admin.
Keep holding them accountable. Keep telling your stories of what it is to move though this world as a woman. Keep your voices at the forefront of this Resistance.

Women’s History Month is important and honored. But we deserve all the other months too, don’t we, kittens?

The email is winedrunksidewalk@gmail.com

Thank you again, for letting me a be a part of your amazing work.

Next up at 10:30 Emma Lee is closing up Women's History Month.

And tomorrow at 10:30 we have a drawing by poet Rob Plath
Posted by John Grochalski at 10:00 AM