WineDrunk SideWalk : ShipWrecked in TrumpLand week SIXTY ONE wrap up

Welcome to week Pour Me Another Vodka, kittens.

Our week began with the president*’s  (the asterisk is necessary don’t you think?) lawyers turning over documents to Bob’s team in an effort to keep him away from the actual inquiry. The documents included White House memos and communications including stuff about firing James Comey.

Speaking of the FBI, IDIOT IN CHIEF hired a lawyer to kick around the idea that the FBI and the Justice Department framed the IDIOT in order to keep him from becoming President. Joseph E. diGenova actually went on Fox news and said, “There was a brazen plot to illegally exonerate Hillary Clinton and, if she didn’t win the election, to then frame Donald Trump with a falsely created crime…Make no mistake about it: A group of F.B.I. and D.O.J. people were trying to frame Donald Trump of a falsely created crime."

Then the IDIOT’s personal lawyer (how many lawyers does one person need? And by person I mean criminal) wanted Rod Rosenstein to end the Bob’s investigation. This was in reference to McCabe’s firing – which if you missed it was when Sessions fired McCabe 24 hours before he was set to retire because not only are they evil they’re just straight up mean. Afterwards, IDIOT’s lawyer walked back on his comment saying that he was speaking for himself not the president*. Okay sure.

So what did IDIOT do? He went to Twitter as usual and started calling Bob out by name. Ranting like the coke-infused maniac he is, he went on to say that the investigation team is staffed by pro-Hillary people and that there are no Republicans on the team. I would just like to take this moment to say that Bob is in fact a Republican.

In a rare moment of actual honesty Republicans – mainly Lindsey Graham, Trey Gowdy and Paul “I Should Be A Used Car Salesman in Wisconsin” Ryan all issued statements saying that Bob should be allowed to do his job.

Meanwhile, 74% of Americans think that policy is being decided by a “deep state” of unelected officials.

In fascinating news the president* is now in a twitter battle with Joe Biden like a couple of high school students threatening to beat each other up (but please mansplain to us again about how toxic masculinity isn't a thing) and ANOTHER woman, a former playboy bunny, is suing to be released from her NDA so she can talk about that time she *ugh* slept with the president*

And since we're on the topic of suing, Stormy how is also suing passed a lie detector test about having unprotected sex *barf* with the president* and a Manhattan Supreme Court Judge ruled that the president* must face a defamation lawsuit by a former Apprentice contestant! WHEE! 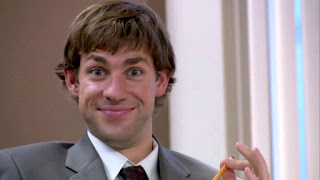 But Ally, you say, this is all going to be better once the mid-term elections come around. Is it now, kittens?

Because we've reached a point where Senators are urging state to purchase voting machines that use paper ballots because they're worried about Russian intervention.

Fucking hell.
It seems they're concerned that the president* isn't doing enough to secure future elections. *laughs until she dies* But why would he? He's the same man who against all known advice from multiple national security advisors who literally wrote in all caps on his briefing DO NOT CONGRAULATE went ahead and call up Putin to congratulate him on his "win." After all we don't want to upset Daddy, now do we? Even the former CIA head knows it.

And that racist white supremacist who was terrorizing black people in Austin blew his racist white ass up but no one in the news media seems to want to actually call his actions terrorism because... 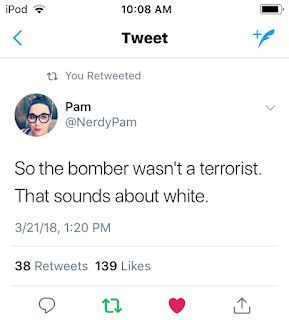 On Thursday the president*’s lead attorney dealing with the special counsel investigation, John Dowd, resigned.  Then IDIOT said he would agree to testify to Bob who has four key issues:


1. What was Trump’s role in crafting a statement on Airforce One about Jr’s June meeting with the Russians

2. the circumstances surrounding the meeting

3. the firing of Comey and Flynn

4. Connections between Trump and Cambridge Analytica.

Meanwhile House Democrats are trying to force a bill through to protect Bob from being fired and ending the investigation.

What else terrible happened? Oh yes, kittens, the House passed a 1.3 trillion spending bill to fund the government through September – including 1.6 billion for the fucking border wall and SURPRISE no resolution for DACA - which the president* did sign after much bloviating about what a hot piece of shit it was claiming that we had no choice but to fund the military. Gearing up for more war, asshole?

While that was happening the president* imposed $60 billion in tarrifs on Chinese imports (what’s gonna happen to all those Chinese-made MAGA hats now?) and in response the Dow did a swan dive of 724.42 points. In response China set tariffs on $3 billion worth of American products so I guess we're gonna go ahead and start that trade war up.

Is it vodka  o’clock yet?

Friday we woke to the oh so delightful news that HR McMaster got shit canned and replaced him with John Bolton who is unarguably a bad human being. Period. Full stop.

For sure the Iran deal is getting scrapped come May and he already wants to start a war with North Korea.

Are you there, Bob? It’s me, Ally.
Sir? We could really use some damning evidence right about now.


Keep resisting, sisters. We must not look the other way. I have this terrible dread that this blog will be seen at some point as a detailed weekly account of the collapse of America.

Who needs a drink?

Next up at 10:30 we’ve got 2 poems from Emma Lee
and tomorrow brings us both Alexis Rhone Fancher and Jen Manalili

Chins Up! Claws Out!